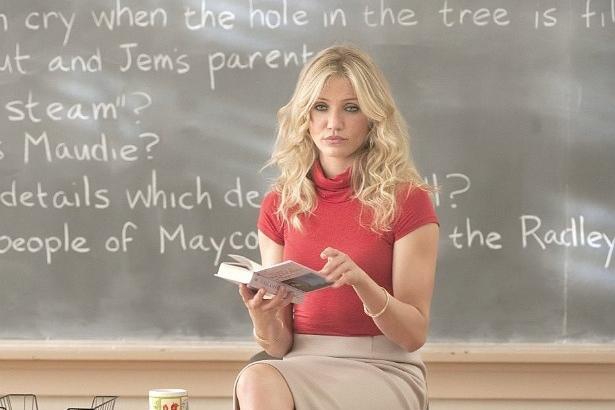 The two big films this week are both disappointing. So look beyond, to a great performance by Christopher Plummer, a long-lost science fiction from Reiner Werner Fassbinder, a mammoth chunk of Chinese history and three more westerns with Jimmy Stewart.

Beginning of the Great Revival: 3

BAD TEACHER: I was expecting nothing more than a juvenile joke fest and I got … well … pretty well just that. It’s fairly funny at times because a few good gags somehow found their way in. They’re rare though. During most of its short running time, this film is cynical and unpleasant. Cameron Diaz plays a teacher with no redeeming qualities at all. She’s a schemer, a cheat, a drunk and more. She’s looking for a rich man to latch on to and targets, in a bizarre in-joke, a new substitute played by Justin Timberlake. He and Diaz used to be an item in real life.

They seem more than a little distant in this film, except for a dry humping scene which is just dreadful and some shared dialogue about a boob job she wants to get to better appeal to him. That brings in a bit of gratuitous nudity (not hers) and a lot of sleazy tone but still nothing of the exuberance of those two raunchy big hits, Bridesmaids and The Hangover Part II. It does make you think about the state of education, though. Not like the recent documentary Waiting for Superman, which gets two specific echoes in this film, but along these lines. It must be hard to be a teacher when pop culture keeps tossing such anti-education distractions at the students.

(Scotiabank and theatres all through the suburbs) 2 out of 5

CARS 2: Because of a scheduling conflict, I haven’t seen this yet, but I polled three friends who have and here’s my impression so far. You can pretty well see all the plusses and minuses in this one picture.

That red car on the left there is Lightning McQueen, four-time winner of the Piston Cup and well-known to millions of little boys who have the merchandise from the first movie. He’s voiced by Owen Wilson. But look there beside him. That’s Mater, the tow-truck, whose drawl and malapropisms are acted by Larry the Cable Guy. He’s now a bigger presence that Lightning, not a bit player anymore. Too much of him. And there’s that third car. That’s Finn McMissile, a secret agent along the lines of James Bond and voiced by Michael Caine. This becomes an international thriller when our boys go to races in Tokyo, Germany, Italy, France, and England and run into a plot involving big oil. The first film advocated getting out of the fast lane and enjoying life in Radiator Springs. That plane and fireball on the left in the picture shows the new reality. Too many story elements and little of the emotional connection Pixar films are famous four. But tremendous animated action and 3-D. (International Village, Oakridge, Dolphin and many suburban theatres)

BEGINNERS: Imagine if one day your father, aged 75 and a recent widower, told you he has really been gay all along. He only acted straight because society pressured him to and your mother felt she could correct him. And there’s more. Your dad now has found a boyfriend, through an internet site, and is hanging around with a bunch of gay friends, all cheerful, good-time guys. It happens to Christopher Plummer and Ewan McGregor, as father and son, in this new film, and is largely based on fact. Director Mike Mills is telling the story of his own father.

“I loved your mother but now I just want to explore,” Plummer explains. That includes late night phone calls from noisy clubs asking what kind of music is playing. (FYI: it’s House music). In another beginning, father and son now have reason to spend more time together. They hound bookstores and talk. A third beginning comes after the father dies, and McGregor tries to make sense of it all by starting a relationship with a French woman, played by French actress Mélanie Laurent. I’m not giving away the plot. The death has already happened when the film starts. The story flashes back and forth in time after that in an elegant balancing act. Juggling act might be a better term. The story elements, the character revelations, the shifting moods between sad and happy are kept moving smoothly and skillfully. I could have done without the dog talking in subtitles and some elements seem manufactured (Ewan at a costume party dressed as Sigmund Freud?) but that’s all minor. This is Christopher Plummer’s movie. He’s vibrant and charming (in flashback, of course). (5th Avenue Cinemas)  4 out of 5