The Tree of Life, Green Lantern, Submarine, films from France and Argentina and Jimmy Stewart rides back 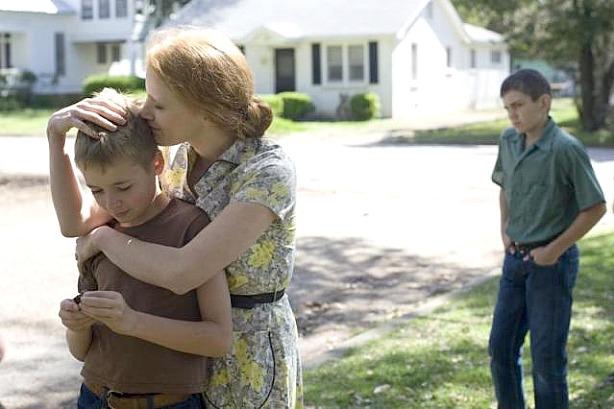 A boy's life in Texas (and in fact the whole universe) is examined in Terrence Malick's artful meditation, The Tree of Life.

Still depressed after that hockey loss and riot? There’s help in the week’s new movies. They  range from subtle art to pure escapism,  with much in between.

THE TREE OF LIFE: Misfortune besets the good as well as the bad. Comforting words; keep them close at hand this week, Vancouver. They’re also central for Terrence Malick in his amazing, poetic new film as he ponders the nature of good and evil, lost innocence, and what path to take in life. He  expounds a face-off between two alternatives: “nature” as represented by a tough, demanding father (Brad Pitt) and the “grace” exhibited by a gentle, loving mother (Jessica Chastain). He doesn’t offer exact answers but depicts the struggle within the everyday life of a family in Waco, Texas in the 1950s, as recalled years later by their grown, citified and philosophically searching son, played by Sean Penn. In the major part of the story, he’s a young boy and played by a wonderful actor named Hunter McCracken. He has to deal with his dad’s bullying (“Do you love your father?”  “Yes, Sir.”), sibling rivalry and more.

A few things set this film above the rest. There’s not much plot. It’s largely driven by the emotions of the characters, their disagreements and their musings on existence. For that, Malick draws on the German philosopher Martin Heidegger, who he has studied and translated. The film, only his fifth in almost 40 years, is expertly crafted and gorgeous to look at. The boy’s birth, for instance is depicted as an underwater sequence. He swims up to the surface light and comes to rest in his mother’s arms. It also has the ultimate flashback, right back to the Big Bang, up through the creation of matter, living cells, even dinosaurs, and finally to the universe today. It takes 20 minutes and comes off as excessive but also visually stunning and hypnotic. This is an ambitious film, sometimes cryptic and, like a classic novel, leaving the final interpretation up to us. (The Park Theatre and International Village)  4 ½ out of 5

GREEN LANTERN:  I haven’t seen this one yet. (Warner Brothers in their misplaced wisdom held the preview the night of the 7th Stanley Cup Game. Even the star, local actor Ryan Reynolds, said he was watching every game, no matter where he was at the time).

I just hope it’s better than X-Men: First Class, which for all its globe-trotting action and skilful writing, I found largely uninvolving, and at almost 2 ½ hours, too long. That’s from a Marvel Comic; this is from their competitor DC and originated way back in 1940. Reynolds plays a test pilot (therefore fearless) who is given a mystical ring by a dying space alien. With it, he gains access into the Green Lantern Corps, a group of warriors who keep peace in the universe.

The ring also gives him the power to create anything he imagines. Unlike many comic book heroes, he has a love interest (played by Blake Lively) and they share some dramatic aerial stunts. The trailer looked cheesy but a friend who did go to the preview reported she likes the film for its characters and action. Dunbar, Oakridge, Scotiabank and many suburban theatres)

L’AMOUR FOU: It translates as “Mad Love” but that’s not what it delivers. This affectionate portrait of Yves Saint-Laurent, the French fashion designer who gave women the pantsuit, is restrained and oddly remote.