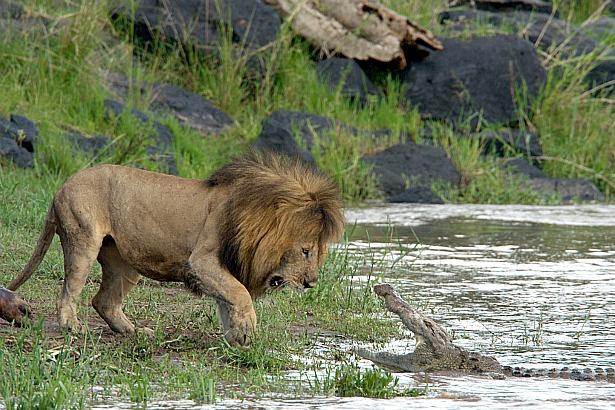 There are so many new films just arrived your entire long weekend could be full. And there are extras too. I can help you choose.

The Desert of Forbidden Art   4

AFRICAN CATS: In the spirit of Earth Day, and maybe even Easter and Passover, this is a family-friendly look into life among the wild creatures. They’re almost like us. They have names, (at least in Samuel L. Jackson’s narration they do), they raise their young like good parents, inspire, protect and teach them. Yes, they do hunt for food but the film shows very little of the harsh results. A wildebeest could be playing in a game when it’s caught. An antelope is already out of sight, behind a hill. There is one scene with some blood, as several lions feast on a zebra but it’s on screen only briefly.

This Disney film deals in family dramas by shamelessly anthropomorphizing the animals. A cheetah, identified as “a single mother,” can’t find her cubs in the dark while there are hyenas about. A lioness is badly injured by a zebra’s kick and has to summon extra courage to keep her family safe. Her sister shuns her. A lion king, once tabbed “the best dad ever,” loses his territory to an invader from the north who arrives with four full-grown sons “set on conquest”. Don’t ask how come the local females take up with these new guys so quickly. The script barely mentions it, probably to preserve the nobility in this fight for survival. The pictures already do that. They’re stunning, taken over a two-year-period in Kenya’s Masai Mara National Reserve and allowing us so clear and close a view of the animals. (5th Avenue Cinemas, International Village and several suburban theatres)  4 out of 5

WATER FOR ELEPHANTS: Robert Pattinson and Reese Witherspoon get romantic at the circus. He’s a vet-school drop-out who hires on to tend to the animals.  She’s the wife of the abusive owner (Christoph Waltz). So how can that possibly turn out?

I haven’t seen it but of three friends who have, two disliked it (flat acting by him, little chemistry between them, Waltz and the elephant are the real stars) and one enjoyed it (he does a good American accent, the romance is sweet, the circus is picturesque). It’s based on a popular best-seller by Sara Gruen, who was born here in Vancouver and lived in Ottawa before moving to the U.S. (5th Avenue Cinemas, Oakridge, International Village and many suburban theatres)

BILL CUNNINGHAM NEW YORK: I read the Sunday New York Times now and then and have never paid attention to two photo features in the style section. Both monitor fashion trends; one among people on the street, the other at society events. This terrific documentary lets us visit with the fascinating eccentric who takes those pictures.

Cunningham is 82. He roams downtown Manhattan on his bicycle on the lookout for fashion drifts that are early signs of a trend. “I let the street speak to me,” he says and industry types listen in. Anna Wintour of Vogue is one of the admirers who appear in the film, along with Tom Wolfe,  society figures like Brooke Astor and Annette de la Renta and a number of friends and dapper followers of fashion. Gradually a rich portrait emerges of an obsessive and a loner, shaped years ago by an issue of family honor and carrying on today free to do what he wants. It’s a memorable character study.  At the same time, the film captures perfectly the atmosphere of modern New York. (International Village) 4 out of 5