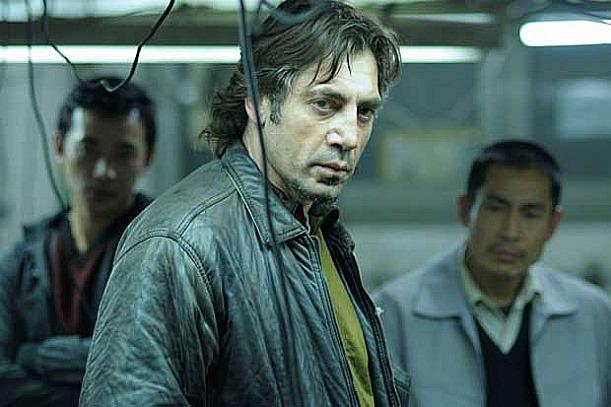 The mean streets and illegal commerce of Barcelona impede a criminal’s search for redemption in Biutiful, starring Javier Bardem.

An Oscar-worthy performance by Javier Bardem tops the list this week, but I don’t expect he’ll win the golden guy. I offer a few modest predictions and then some thoughts on these new arrivals.

THE OSCARS: Here’s what I think might/should/will happen Sunday night. Keep in mind though,  I’ve only ever won an Oscar pool once, out of many tries.

My problem is that I’m prone to over analyzing what the academy members might be thinking while they often just go ahead and vote for the most obvious. I expect a lot of that this year.

BEST PICTURE: The King’s Speech. It’s hard to imagine the momentum for this film having slowed down. It’s poignant and, as a bonus, very funny. The Social Network is not.

BEST ACTOR: Colin Firth, for the same reason: momentum. Plus his subtle performance, of course,  the fact that he’s owed something for being overlooked last year and since Javier Bardem, his main rival, is hobbled by acting in a foreign film. Biutiful probably comes across slow and even boring on DVD, which is how most of the voters would have seen it.

BEST  ACTRESS: Natalie Portman for her showy Black Swan. I wish Annette Bening would get it for The Kids Are Alright.

BEST SUPPORTING ACTOR: Christian Bale stole the movie, so why not the statue for The Fighter.

BEST SUPPORTING ACTRESS: Melissa Leo for  her tough-love mother in The Fighter.

BEST FOREIGN LANGUAGE FILM: I’ve only seen two of the five contenders, but I can’t imagine anything more harrowing, moving and ultimately concerned with promoting reconciliation than Incendies. Yes, I’m rooting for the Canadian in the list.

BEST DOCUMENTARY FEATURE: Exit Through The Gift Shop, because I want to see if Banksy shows up to accept. He’s been told he can’t come in costume to disguise himself. Inside Job might get votes from people who didn’t see the better documentaries on the financial meltdown.

BEST DIRECTOR: David Fincher made The Social Network crackle with life and even got a terrific performance out of Justin Timberlake.

BEST ORIGINAL SCREENPLAY: David Seidler, The King's Speech. Momentum again, although I wish Inception or The Kids Are Alright would get it.

BIUTIFUL: After his film Babel became a big hit, Alejandro González Iñárritu said he was finished with multiple, fractured storylines. The Mexican director (now based in California) announced his next one would be a single story about one man. He’s given us that but he’s also thrown in enough plot for three movies and more than enough themes to drive a long post-movie discussion. A quick list: spirituality, redemption, death, crime, illegal immigrants, sweatshops, family obligations, corruption, addiction. And there’s more in these crowded 2 ½ hours of gloom made almost vibrant by a spellbinding performance by Javier Bardem. He and the film are up for Oscars on Sunday. He won the best actor award at Cannes.

Bardem plays a low-life criminal in Barcelona, back in the hidden immigrant areas that the tourists don’t get to. His Chinese partners make knock-off goods and he’s got a group of Africans selling them in the streets. He pays off the cops and endures their occasional raids. As a sideline, he hustles the mourners at funerals by claiming he can communicate with the dead. On the personal side, he deals with an impulsive brother and a bi-polar ex-wife and cares with great affection for his two children. There’s unexpected tenderness in those scenes with his kids.

Then he gets the bad news. He’s got cancer and has only weeks to live. The bad man turns to putting his affairs in order to save his soul. That proves more than difficult as problem after problem shows up with the people around him. Bardem, who is on screen almost every minute, subtly evolves his character from ominous and tightly-wound to liberated and accepting what he can’t control. It’s downer but also a rewarding film. (5th Avenue Cinemas)  4 out of 5