Sanctum, A Drummer’s Dream, What Women Want (Chinese version) and Guido, Superstar. But not The Roommate. 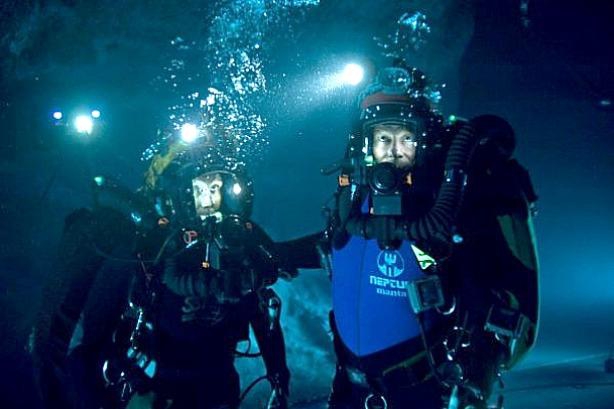 The big film this week, The Roommate, was hidden from the media. James Cameron, a Chinese movie company and a local actor-turned-filmmaker were eager to get publicity, and three smaller films deserve more of it.

Here’s this week’s line up:

SANCTUM: James Cameron has us underwater again and in 3-D this time. He didn’t direct this claustrophobic and noisy thriller about exploring caves but as Executive Producer he must have overseen it. The camera system is the one he developed for Avatar and the story is true. It happened to a friend of his. So, this must be one cracker jack of an adventure movie, right? Nope. It wears you down with lots of yelling and exertion, occasional scenes we don’t understand and only a few moments of genuine tension. Oh, and there’s a father-son conflict that comes centre screen too often.

“The world’s most determined cave diver” (Richard Roxburgh) is exploring a huge system in Papua, New Guinea. He pushes his crew relentlessly and badgers them about every detail of their equipment and technique. He’s hardest on his son (Rhys Wakefield) who doesn’t buy the defense that “he’s really a good fella, once you get to know him.” Most of the speeches are in deep Australian, except for those of a couple of Americans (played by Ioan Gruffudd and Alice Parkinson) who seem to be financing the expedition. The real story here is that as they all explore, a storm is moving in. The caves will be flooded. Can they get out? There are spectacular cave vistas, tight “restrictions” to crawl through and a churning pool described as a “meat grinder” to cross over. It’s only sporadically gripping though, and the lackluster script prevents us from caring much for the characters. (Scotiabank and many suburban theatres) 2 ½  out of 5

A DRUMMER'S DREAM: “Caravan with a drummer solo,” is the call in a Frank Zappa song. John Bonham and Ginger Baker used to deliver them at length. Now you can get several of them, in different styles and from some top players in this Canadian documentary. Both the primal rhythm and the pure joy of drumming come off the screen right at you.

One by one the drummers perform for a small crowd of students at a lakeside farm in rural Ontario. They play a solo, explain what they’re doing and tell their own history. Giovanni Hidalgo learned to play fast by turning his 33 rpm records up to the 45 speed. Horacio “El Negro” Hernández, originally from Cuba, recalls using discarded x-ray film for his drum heads. Dennis Chambers is on 300 records but can’t read music. Mike Mangini creates a visual blur when his solo peaks. There are seven players in all, including Santana’s drummer, Raul Rekow and when they come together near the end for a jam session it’s untidy and ecstatic.

BIRDWATCHERS: This film has almost nothing to do with birders. We see some only briefly at the start. After that we get a well-observed and fiery tale of aboriginals pressing their rights in Brazil.

There was an incident here in B.C. that played out in almost exactly the same way at Gustafsen Lake up in the Chilcotin 15 years ago, when a group of natives occupied some ranchland they claimed was sacred. In this film, a group of Guarani people led by a sometimes drunkard named Nádio leave the reserve and reclaim their ancestral land. They set up camp on a public roadside next to a prosperous farm, and later, as their numbers grow, move right on to the fields. They expect to hunt and gather. Instead there’s a slowly escalating confrontation brewing with the farmer who tries to be liberal but argues his right to the land because his family has owned it for three generations. The issues are difficult and the filmmakers don’t minimize either side’s argument,  although some early racist scenes and an appeal in the end credits indicate which side they support. The cinematography is beautiful  and the actors, non-professionals from the area, are completely natural.