Incendies, Another Year, No Strings Attached, and more, plus a new film festival 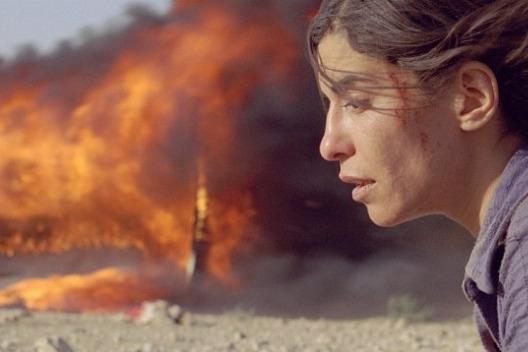 Lubna Azabal gives a shattering performance in Incendies as a victim of a Middle Eastern civil war.

Two superior films top the menu this week, one Canadian, but largely set in Lebanon, the other from England. These are all the titles I cover in this edition.

INCENDIES: A friend saw this, enjoyed it very much and then was startled to learn that it’s Canadian. Like many movie fans, he doesn’t expect films this intense and so profoundly moving from our industry. Quebec’s Denis Villeneuve though, does make them strong (Polytechnique was his last one) and is probably our best director right now. Variety, the trade publication, named him among 10 to watch while the film has just made the short list for an Oscar nomination. The final list comes out Tuesday.

Incendies is a mystery that draws you in and grabs you hard as a brother and sister from Montreal (Mélissa  Désormeaux-Poulin) and Maxim Gaudette) retrace a painful family history. Their mother’s will instructs them to find their father, who they thought was dead, and their brother, who they had never even heard about, and deliver each a letter. The quest takes them to an unnamed Middle Eastern country, presumably Lebanon, where, through flashbacks both sunny and harrowing, we learn their mother was a political activist who got caught up in a civil war.

There are grim scenes in prison, from which she is still remembered as “the woman who sings,” and a revelation that has people gasping, although some scoff that it’s preposterous. Still, the power of Lubna Azabal’s performance as the mother, the beautiful cinematography and the strong direction make this a wrenching and deeply affecting story. In French and Arabic, with English subtitles. (International Village) 4 ½ out of 5.

ANOTHER YEAR: An exceptional film for adults, about real people, happiness or lack of it and, a rarity in the movies, a happily married couple.

Jim Broadbent and Ruth Sheen play the duo as avid gardeners, good cooks and amiable hosts. No wonder they attract a group of emotionally-needy folks to their North London house for dinners, friendly chats and the occasional psycho-drama. There’s a beer-swilling old friend who can’t bring himself to retire from work and natters on that “everything is for young people these days.”  There’s an office-colleague who’s all motor-mouth cheerful until a few glasses of wine bring out a deep loneliness. As played by Lesley Manville, she’s alternately funny and maudlin and always compelling to watch. Compared to them, the hosts’ son is quite normal, although busy fending off mild hints from his parents that he should find a wife and deflecting some not so mild flirting from Lesley.

The film is entirely taken up with the interaction of characters like these over the four seasons of the year. The visitors share their hang-ups and the hosts offer sympathetic advice and never judge. There’s a re-boot in the repeating dynamic when the son brings home a self-confident, outspoken young woman who delights all but Lesley. That, and a funeral later on, which introduces a widowed brother of very few words and his angry, abusive son, is about all the story there is. The film is eminently watchable though as it bounces easily between comic and crisis scenes. Director Mike Leigh’s dialogue is sharp and witty with just a touch of cynicism to keep it from becoming cloying. (5th Avenue Cinemas) 4 out of 5