Waste Land, Vision and a Festival of new films from Europe 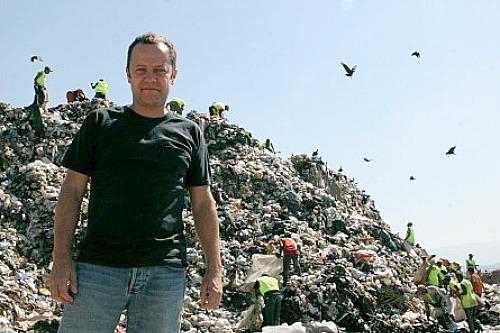 Four big films came out on Wednesday this week. You can find my reviews by clicking  on CULTURE and scrolling down. I gave them these ratings:

LOVE AND OTHER DRUGS (Viagra salesman Jake Gyllenhall falls in love with Anne Hathaway):  3 ½ out of 5

BURLESQUE (Christina Aguilera starsd in Cher’s nightclub): 3 out of 5

And these are Friday’s new movies ….

WASTE LAND: This documentary was voted the popular film at this year’s Vancouver International Film Festival. It’s now also on the official short list for an Academy Award nomination and no wonder. It takes us into a world we’ve never seen before and asks the question filmmakers love to ponder: can art change people? I don’t see as much evidence on the yes side as some people do, but the trip is fascinating, and often eye-opening.

We’re taken to the world’s largest garbage dump, just outside Rio de Janeiro, where as many as  3,000 people pick through the refuse for recyclable materials they can sell. Vik Muniz, the Brazilian artist now based in Brooklyn, N.Y., has an idea for an art project. He photographs some of the pickers, recreates the images in a warehouse using garbage, photographs the result and sells the prints at auction in London. One of them brings in 28,000 pounds. The film’s heart though is not in exploiting but meeting the pickers, discovering their dignity and as Muniz says  “their appetite for life”. They’re poor but not beaten down. An organizer has started a medical clinic and a day care. Another runs a lending library with salvaged books. Three women say they’re proud to be pickers and not selling their bodies. Art didn’t create that. It just spread the word. (5th Avenue) 3 ½ out of 5

VISION: Hildegard von Bingen was rediscovered back in the 1970s by feminists looking for women who made history. She was a German nun who back in the 12th century helped advance science and medicine, wrote poetry and plays, composed music and stood up to church leaders to gain a separate cloister for women. She was also a mystic who claimed to be getting messages from God. Surprisingly, the church let her publish her accounts of those visions.

In this beautifully rendered film by Germany’s Margaretha von Trotta, Barbara Sukowa plays the head-strong nun with a fierce intelligence inside a congenial exterior. She gets what she wants by asking nicely, then insisting and then appealing up the levels of power within the church. She lectures against envy, bans suffering in the name of Jesus through self-flagellation or wearing a spiked belt and explains the psychology of “male potency.”  She’s confident in her ideas and in that respect comes across as very modern. As if church politics aren’t drama enough, the film adds an almost love story with an acolyte who clings to Hildegard. It’s emotional but feels at odds with the historical story. The acting from everybody is strong and the actual convents and churches used as locations add a rich texture to the film.(VanCity Theatre) 3 out of 5