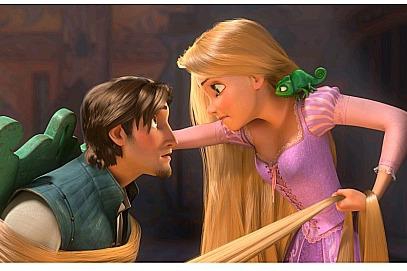 Because of American Thanksgiving, the big films are out early this week. Yes, here in Canada too. There are more, mostly smaller ones, coming Friday, along with a new name, new owners  and hopefully few other changes at Tinseltown. Meanwhile enjoy a fairy tale, a modern romance, an old-style musical and a quest for revenge.

TANGLED: Another revisionist fairy tale from Disney but this one is so good you’ll be happy to take children to it. Boys as well as girls, because the Grimm Brothers’ Rapunzel is now an exciting swashbuckler as well as a young woman’s tale of growing up. Add in a couple of funny animals (a very expressive chameleon and a horse with a stern sense of duty) and you’ve got all ages covered. Plus there’s beautiful artwork that hails back to classic children’s book illustrations.

The story is now vastly different although the Freudian undertones are intact, even heightened. Here, Rapunzel (voiced by Mandy Moore) is a princess but doesn’t know it. An old hag stole her from the queen, claims she’s her mother and keeps the now 18-year-old teenager locked in a tower. She spouts guilt trips and dire warnings that the world outside is dangerous. “Mother Knows Best” she proclaims in a song, in one of a series of mother-daughter conflicts. A chance to break away arrives with a rogue and thief named Flynn Ryder (a nod to Errol Flynn, who played many rascals in the movies). He’s voiced by Zachary Levi. The two set out together, lead a tavern full of ruffians to sing and dream, face death by drowning, a spectacularly collapsing aqueduct in an abandoned mine and other dangers while pursued by his two former pals, the fake “mother”, the king’s army and that pesky horse. It’s both enchanting and an exciting adventure. Good 3D too, although the film is strong enough that it works just as well without it. (Tinseltown and several suburban theatres) 4 out of 5

LOVE AND OTHER DRUGS: You’ll find a very modern romance here. It’s candid about sex, endearing about the slow come together dance of two people who initially fight closeness and is sharply critical about the world around them. Well, that last part is not so hard since the world is the pharmaceutical industry which gets a potent condemnation. I’m surprised that Pfizer allowed their name and products to be used. A training session is like a pep rally for hucksters and some startling profit numbers are cited.  Jake Gyllenhaal plays a cocky pharma rep who fast talks the ladies and nudges doctors to prescribe his products. At one point he actually bribes one with Viagra. Jake also makes a sex-buddy connection with a spirited young woman (Anne Hathaway) who takes a lot of pills to live with Parkinson’s Disease. She’s sweet and acerbic and mordant and much else. Their struggling relationship evolves with some sharp dialogue, good acting and tastefully graphic sex scenes. The payoff is muted though because the film breaks the mood. It starts as a comedy, turns serious and just before the climax interrupts with a clumsy bit of wackiness that adds nothing. Overall, an enjoyable film.  (Tinseltown andl suburban theatres)  3 ½ out of 5

BURLESQUE: Cabaret? Chicago? No, there’s no match here. You’ll have to be content with a decidedly second-level musical, one that entertains but hardly ever thrills. Christina Aguilera, known for her powerful Grammy-winning voice and by trivia buffs for a small role in Moulin Rouge, makes her acting debut as young woman from Iowa looking for stardom in Los Angeles. She finds it in a retro burlesque club run by a former dancer and occasional singer played by Cher. It’s not a strip-bar, one character says, although the gyrations and stripper get ups tease just as much.

The whole enterprise is campy rather than artful and entertains in a mildly garish way. The plot is an old-style stage musical as the newcomer gets her chance to shine when the headliner arrives just one too many times, late and drunk. The club is also in danger of foreclosure and a real estate developer pushes an offer to buy it. Cher, who has to deal with all that, seems a bit less than fully involved. Her stage manager (Stanley Tucci) is appropriately caustic and funny.  Christina’s acting is adequate (not a lot is demanded of her) but her singing and writhing on stage are fine. The songs are an odd mixture that includes originals, two Etta James compositions, “Diamonds Are a Girl’s Best Friend” and even a Jelly Roll Morton number. The production numbers are glitzy fun. (Tinseltown and suburban theatres)  3 out of 5

FASTER: Not really what I think of as Thanksgiving entertainment but I suppose revenge epics come any time of the year. This one has a lot of slow motion caressing of guns and fast scenes of violence. Also an often grubby atmosphere. Dwayne Johnson, who you used to know as “The Rock”, plays a hood who is let out of prison and immediately sets out to kill the people who put him there and, incidentally killed his brother. Driving a hot muscle car with a black and white paint job that reminds you of a skunk, he speeds and screeches and u-turns his way from Bakersfield, California to Nevada while two cops (Billy Bob Thornton and Carla  Gugino) and a hitman (bright newcomer Oliver Jackson-Cohen) are chasing him.

There are brutal scenes (one man is shot on an operating table) balanced with moody ones (a gospel preacher pleads to explain his former criminal ways). There’s confusion in some of the storytelling, as in why the police have a video of all the subjects and the original crime ten years before. There are also a few improbable but nifty surprises. A low-class but engrossing film.   (Scotiabank and suburban theatres)  2 1/2 out of 5

NOTE: The images are supplied by the movie studios and are therefore the exclusive property of their copyright owners.