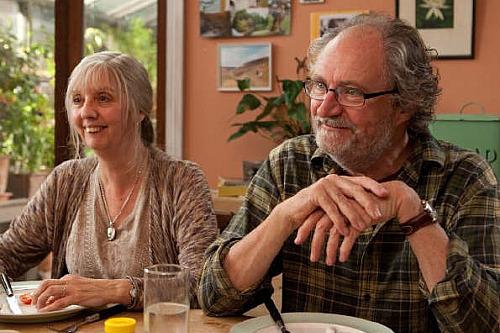 Ruth Sheen and Jim Broadbent are a happily-married couple with needy friends in Mike Leigh's Another Year.

A film for mature adults tops my best suggestions today. It’s Another Year by Mike Leigh. Quebec’s Xavier Dolan is after a young audience with his award-winning new one, Heartbeats,  and if you’ve got 5 ½ hours to spare there’s cinematic terrorism with Carlos. Also, some very good films getting repeat screenings.

ANOTHER YEAR: An exceptional film for adults from Mike Leigh. This is a warm comedy-drama about people – not plot – people, who come together once a season and over dinner, or a cup of tea, share what they’ve been up to. At the centre are the hosts, a North London couple played by Jim Broadbent and Ruth Sheen. They garden, love to cook and never argue or even disagree. No wonder they’re a magnet for a bunch of emotionally-needy folks who drop over and let their hang-ups slip out. Chief among them is a middle-aged secretary who talks merrily on about her car, recycling, and anything else that springs into her mind but when she gets tipsy lets on that she is lonely.

That’s her in the middle in that photo. Lesley Manville plays her with a subtle mix of comedy and pathos; a little ditzy, a serial flirt and something of a narcissist. The other visitors include an unmarried son, a brother of very few words and a beerbelly friend who complains “everything is for young people these days.”  The film bounces easily between comic and crisis scenes. Leigh’s dialogue is sharp and witty but also note how much his characters communicate with their eyes and facial gestures. (Also screens Wednesday)  4 out of 5

HEARTBEATS: They're calling Xavier Dolan a wunderkind. The Quebec director/writer/actor won a big prize at the Cannes Film Festival for the second year in a row. In this film, which in French is titled Les Amours Imaginaires, a gorgeous blond young man just in from the country is pursued by two love-struck city folk, a woman (Monia Chokri) and a man (played by the director himself).

They can't establish what side the guy plays on but the contest is on anyway. So is it a hopeless crush? For him or for her? There are comic and fantasy sequences, parties and retro clothes and, edited into the film now and then, thoughts on love and life from real young people, the same group this movie is aimed at. (Also screens Wednesday)

REJOICE AND SHOUT: A last chance to catch this rousing documentary about black gospel music. The big stars are all in here in great clips, people like Mahalia Jackson, Clara Ward and the Staples Singers, along with The Edwin Hawkins Singers, The Dixie Hummingbirds, and many others. I knew it was authentic from the first person you see: Andre Crouch who has been immensely influential as an artist, preacher, mentor and Grammy winner. The history of the music goes back to slavery days when plantation owners forced the people to become Christians. They did but with their own spin. This film entertains with generous clips of that music, not just snippets. 4 out of 5

WAGNER AND ME: Stephen Fry’s wit is fully engaged as he ponders a delicate ethical problem. He loves the music of Wagner but with qualms. Frye is Jewish and Wagner was anti-Semitic and a favorite of Hitler’s Nazis. So how should he resolve that dilemma, Fry wonders. He takes us on a tour to the locations that tell Wagner’s story including the opera house that was built for him, Switzerland where he lived in exile, even the plaza in Nuremberg where Hitler staged those huge rallies. (Fry couldn’t bring himself to climb up to the Fuehrer’s actual podium spot.)  Elsewhere he’s as excited as a child, at a Ring Cycle rehearsal, for instance, or playing Wagner’s own piano, or later when he yelps “I touched a Wagner” (the composer’s granddaughter). An Auschwitz survivor stirs a more solemn look at the issue. (Also screens Wed.)  3 ½ out of 5

CARLOS: This was one of the break out hits at the Cannes Film Festival even though it is 5 ½ hours long. Reports said it moves so fast people felt energized rather than tired when it ended.

(A version less than half as long will be in theatres here in two weeks).