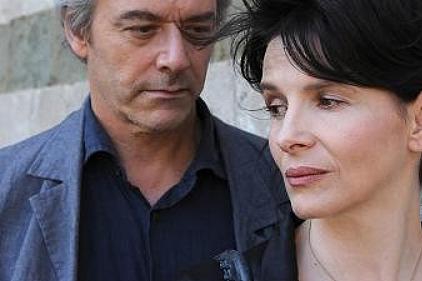 CERTIFIED COPY: It was a hit at the Cannes Film Festival and won Juliet Binoche a best acting award. That's enough to make it a big draw at VIFF. The first of three screenings is tonight. Binoche plays a French antique dealer in Tuscany who agrees to drive a British art expert around the region. He's played by William Shimell, an English opera singer. As they drive they discuss art criticism and how to detect fakes, about which he wrote a book. Then, although they've just met, they start pretending that they are married. Or is it pretending? A classic film festival scenario from Abbas Kiarostami, the noted writer/director (and activist) from Iran. (Also screens Monday and Thursday).

CARLOS: This was one of the break out hits at the Cannes Film Festival even though it is 5 ½ hours long. Reports said it moves so fast people felt energized rather than tired when it ended. (A version less than half as long will be in theatres here in two weeks).

Edgar Ramirez plays the Venezuelan terrorist dubbed Carlos the Jackal through two decades of direct action, from his early links to Palestinians, his famous attack on an OPEC meeting in Vienna, his freelance work for Moscow, Syria and Libya and his fall after the U.S.S.R. collapsed and Arab countries shunned him. Apparently we’ll get to see a real man behind those political actions, sexy, vain and gaining weight as the years move on. (Also screens Monday)

THE DESERT OF FORBIDDEN ART: Deep in central Asia, in the republic of Karakalpakstan (an autonomous region of Uzbekistan) a museum houses one of the world’s great art collections. How that came to be is the subject of this fascinating and dare I say, eye-opening, documentary.

There are 44,000 paintings in the collection, mostly avant garde art that the Soviets banned. They would have been destroyed if Moscow or the KGB ever got wind of it but this region was just too far from the centre and too doggedly independent. An unsuccessful artist named Igor Savitsky collected them and even got money from Moscow under the pretext he was collecting socialist art. The film shows stunning works by major artists who would be famous if they hadn’t been banned. For fun, it also shows some choice examples of state-approved art. Ben Kingsley, Sally Field and Ed Asner help with diary and letter readings. (Also Sunday and Thursday) 4 out of 5

WINDS OF HEAVEN: This worthy examination of the life and work of Emily Carr has much positive going for it, and one negative. It feels like an educational film. It's stiff and more than a bit precious. That's out of character with the content which celebrates a pioneer artist who worked alone in Victoria, found her own way and gained world attention. Refering to her paintings, Lawren Harris told her: "You have the feeling of the west coast." It took the National Gallery in Ottawa a long, long time to notice but that's part of the west coast experience too. The film has lots of rare pictures that chart her life and at the same time give a concise history of the province and its native people. Then it makes the startling claim that she had no real sympathy for natives. Let the debate begin. (Also screens Sunday and Wednesday)  3 out of 5

KINSHASA SYMPHONY: VIFF’s new Africa series includes this hugely inspiring film about dedication no matter what. In the capital city of the Democratic Republic of Congo, one of the most war-plagued countries on earth, there is a symphony orchestra rehearsing for a big concert. It’s not easy. The power sometimes goes out. Brake cables replace broken violin strings. The woman on cello is busy all day selling omelets all day on the street. Players have to find space to practice and time.

But they have a tough, exacting conductor who prods them to get better every time they play. He makes the novel claim that there are African rhythms in Beethoven. It gets results. The one piece we hear repeatedly is Beethoven’s Ode to Joy, a problem in itself. The chorus has to sing in German, a language none of them know. They also play Mozart, Verdi and Orff  A final rehearsal and then the big concert before a huge crowd of ordinary people caps this feel-good documentary. (Also next Thursday)  4 out of 5

MY WORDS, MY LIES: Cumbersome title; sprightly film. This comedy from Germany has great fun satirizing the book business. A young waiter becomes a literary sensation through fraud. He didn’t write the book credited to him but the literati love him; publicists promote him and he’s put before huge audiences to read.