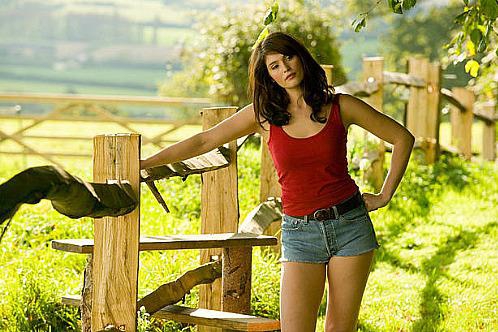 Gemma Arterton has a showy presence at VIFF this week (as Tamara Drewe) but also lots of competition. Consider just a few on the list: a Chinese disaster epic, a sleek German crime thriller, classical music in the Congo, drug money mixing with soccer in Columbia, inspiration from David Suzuki and an ethical dilemma from Stephen Fry. All those plus two fairy tales.

AFTERSHOCK: China’s biggest movie hit ever brought packed houses to tears this summer. It’s both a blockbuster and a wrenching story of human beings coping with disaster. The film dramatically recreates the aftermath of an earthquake in 1976 with classic Chinese storytelling and a let-it-all-out operatic grandeur. Strong acting, great special effects and a script about terrible choices that people have to make come together in a highly emotional epic almost 2 ½ hours in length. Directed by Feng Xiaogang, China’s most successful filmmaker these days, although mostly with comedies before this. I’m looking forward to it. (Also screens Sunday and Tuesday)

WAGNER AND ME: Stephen Fry’s wit is fully engaged as he ponders a delicate ethical problem. He loves the music of Wagner but with qualms. Frye is Jewish and Wagner was anti-Semitic and a favorite of Hitler’s Nazis. So how should he resolve that dilemma? Fry takes us on a tour to the locations that tell Wagner’s story including the opera house that was built for him, Switzerland where he lived in exile, even the plaza in Nuremberg where Hitler staged those huge rallies. (Fry couldn’t bring himself to climb up to the Fuehrer’s actual podium spot.)

At times he’s as excited as a child, at a Ring Cycle rehearsal, for instance, or playing Wagner’s own piano, or later when he yelps “I touched a Wagner” (the composer’s granddaughter). An Auschwitz survivor stirs a more solemn look at the issue. (Also Mon and Wed next week).  3 ½ out of 5

FORCE OF NATURE: THE DAVID SUZUKI MOVIE: Yes it’s a lecture, but don’t be put off. It’s much more than that, for one thing because Suzuki is such a compelling speaker. You’ll be captivated and maybe convinced by his argument that we have to act like we’re part of the environment, because we are, and not above it. He’s says that every chance he gets but it doesn’t sound old here. It’s urgent and passionate and it comes in short bursts from a speech he delivered at UBC’s Chan Centre.

Between those bursts the film traces his life story by taking him to where he lived it, including the Slocan Valley where his family was forcibly moved in World War 2, Leamington, Ontario where they re-located and he was the only Asian kid in town, Tennessee where he did first science work, UBC where he ran a lab, Hiroshima where he ponders the atom-bomb, and Haida Guai, where he firms up his environmental ideas. There’s a strongly emotional side that he lets out in these visits. You don’t see that often and helps make this a moving and dramatic documentary. (Also screens Thursday) 4 out of 5

THE YELLOW BITTERN: The Life and Times of Liam Clancy: He tells it all himself. Fame and big record sales with his brothers and Tommy Makem, a chance meeting that turns into a love affair with a folk song collector who later reveals she’s actually a Guggenheim, friendship and praise from Bob Dylan, TV, Carnegie Hall, and money problems when the success fades. Then a revival for Liam in Calgary. Liam is such a mesmerizing storyteller that he makes even ordinary anecdotes come alive. He spent five years working on this and died only three months after it was premiered in Dublin last year. (Also Oct 13).  3 ½ out of 5