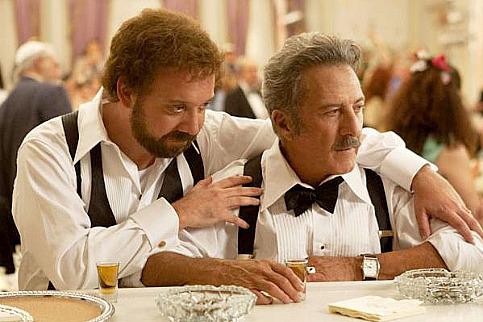 Paul Giamatti and Dustin Hoffman are Barney and his father in the entertaining Canadian film Barney's Version.

My picks are usually films that I’ve seen and rate highly. Today you’ll find a couple I’m not recommending but want to tell you about anyway.

You’ll also have a second chance to catch the most acclaimed Canadian film in some time and over the next two days spend time with some unusual British criminals and an English comedy about racial animosity. And documentaries are particularly strong at VIFF this year. I’ve included several on this list.

BUT FIRST: Better hurry and get your tickets for The Infidel, that English comedy about racial animosity (see below).There'll be a rush for the only other screening on Monday because the festival screwed up the one Saturday night. They had a full house enjoying a very funny movie with a tremendous, energetic performance by a Muslim actor named Omid Djalili when things went bad. About 3 or 4 reels in, the picture srtarted running upside down and backwards. The reel had been wrongly spliced in and what's worse, the festival staff didn't know what to do about it. They gave everybody a voucher and sent them home disappointed. Every year, Some films get extra screenings. The Infidel has to be one.

12 ANGRY LEBANESE: Here’s an idea. Go into one of the worst prisons in the world, Roumieh prison in Lebanon, get 45 inmates, including murderers and rapists, and get them to rehearse for 15 months and put on a play. You’d have to be crazy. Well, it happened, under the cajoling leadership of a young woman named Zeina Daccache. She gets them to perform 12 Angry Men, the play about of a jury arguing and debating a young man’s fate in a murder case. The inmates are tough and doubting when they start but gradually meld into a cohesive cast as she pushes them on. Something more remarkable happens. Several  become introspective. They admit to their crimes and ponder exactly what caused them to commit them. The film leads to the big show where they’ll be playing to a VIP audience of officials and politicians. It’s a powerful film.   4 out of 5

ALTITUDE: You might want to catch this just to see what some of our local filmmakers are doing with genre movies. But be warned, although there is some OK acting and good tension and atmosphere early on, they’re driven away by hysteria and a ludicrous monster. The story could have worked in a comic book, an old Weird Tales or some such from the 1950s. It doesn’t work on the big screen. The comics reference is more than incidental. Kaare Andrews, the director, is famous for his work for Marvel and other publishers. A valuable comic book also figures in the story. You can see it in the photo.

Four friends are on their way to a concert, in a plane piloted by Sara (Jessica Lowndes) who has just earned her license. She brought along her boyfriend who’s morose and spacey, which creeps out the others, especially the beer drinking jock. In quick order we get a bit of on-board bullying, a sudden storm, a dead radio, a mechanical failure that makes the plane uncontrollable and flying higher. An impossible out-of-cabin repair (like a space walk) could be the answer, but there’s still a monster to come too. Made in Vancouver, Langley and Pitt Meadows by the aptly-named Escape Factory, this film will be on DVD at the end of the month. (Also screens Tuesday) 2 out of 5

BARNEY’S VERSION: A second chance to catch this glossy and entertaining Canadian film. You probably didn’t want to pay the $175 they charged Thursday night but you’ll have to hurry. It’s the first film of the day. No they don’t make it easy. But it’ll be back in December. Mordecai Richler’s award-winning novel has been tweaked quite a bit for this movie version —no French-English arguments, for instance—but with The Habs, The Expos and Grumpy’s Bar all in evidence, the Montreal flavor is intact. So is Richler’s sardonic humor which comes on strongly early in the film. Later things get more serious. Barney you see is an ornery type, and Paul Giamatti plays him perfectly. As one character says to his face “you’ve screwed around everybody you ever met or cared about.”  He’s a TV producer and we see him looking back over his life. Flashbacks take us there, particularly the day he got married (to Minnie Driver) and immediately fell in love with another woman (Rosamund Pike). His messy love life and his drink-fueled friendship with a pal (Scott Speedman) take up most of the story, although a murder allegation floats in and out a few times and problems with a failing memory add pathos. Dustin Hoffman brings humor and tidbits of fatherly advice. 3 1/2 out of 5

DOWN TERRACE: There’s a novelty factor in this British film about a crime family. Nothing much happens for the longest time. These people talk, argue, bicker and talk some more. A few times they pick up a guitar and play a blues song. Bill, the patriarch, is a former hippie who likes to pontificate. “I’m a simple man,” he says. “I like to re-connect with the essentials.”  That includes fasting and smoking a bit of hash. His son narrowly avoided jail and now wants to find who snitched on him. So the film progresses with all these scenes of domestic life while both son and dad work through their suspicions  and size up a succession of friends who drop over. When violence does happen, it’s quick and intense. The actors, mostly from British television, are excellent, although their accents take some work to follow. (Also screens Thursday) 3 out of 5