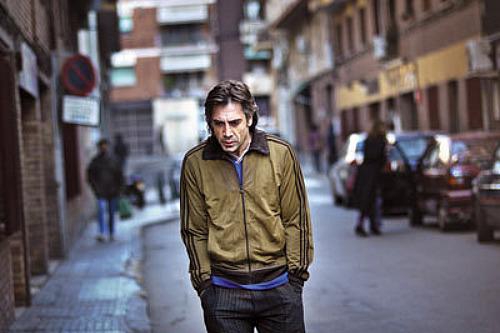 There are over 200 full-length films and 150 short ones showing this year.

You can read my picks for Saturday right here.  I’ve listed only films I’ve seen and can recommend plus a few I’m looking forward to.

ARMADILLO: A documentary crew lives and films among a Danish army unit in Afghanistan. This is much like the recent Restrepo from the U.S. only better in every way. There’s more drama, more soul searching, more action, more tension  and when these guys kill a farmer’s cow they compensate him. (Also screens Sunday and Wednesday)  4 out of 5

BIUTIFUL: It was said to be the saddest film playing at Toronto’s festival but at Cannes it won Javier Bardem a best acting award.

He plays a low-life criminal in Barcelona who’s involved in sweatshops, knock-off goods and illegal immigrants, hustles the parents of a dead boy, sees images of his own dead father, takes care of two children while his bi-polar ex-wife pleads to be taken back and to top it all off is told he has cancer. And there’s even more in these crowded 2 ½ hours from Alejandro Gonzalez Iñárritu. His last film was Babel.  (Also screens Monday)

CITY OF LIFE: These film makers in Dubai with their first effort are clearly emulating Hollywood and Bollywood. Naturally most of the films they see come from there. So this glimpse inside the fast-growing emirate may or may not be accurate. It’s interesting though and gleaming like the emirate’s modern architecture and very urban. Three stories intersect. A young, rich Arab spends his time drinking with his friends and driving fast in his expensive car. A worker from India is stuck driving cab and tries to moonlight as a singer in a club. A stewardess, originally from Romania, takes up with Jason Flemyng who ultimately turns into a caricature of an insensitive westerner. This is a journeyman effort at best, but may reflect something real. (Also screens Oct 8 and 14)  2 ½ out of 5

A repeat ….(from Friday)

FATHERS AND SONS: The question is: Do the men have as much to say as the women? Two year’s ago Carl Bessai’s Mothers & Daughters  was voted the most popular Canadian film at VIFF. Six familiar local actors played three mother/daughters pairs as they talked about their relationships. Their speeches were formed in improvised workshop sessions. Now the father-son bond is explored by four pairs of male actors including Jay Brazeau, Tyler Labine, Ben Ratner, Tom Scholte and Blu Mankuma.

THE 4th REVOLUTION:  Or as one speaker in this documentary puts it: “The biggest structural change since the industrial revolution”. He’s talking about the shift the world has to make away from fossil fuels to renewable energy, like wind, solar and (of particular much-debated note here in B.C) run of the river. Another speaker says we’ve got maybe 13 years to do it. This film from Germany takes a we-can-do-it approach by visiting folks already taking major steps. You see electric cars in California and Norway, a rural power project in Africa, wind-power in Germany, solar power in Spain and, surprisingly, China, home of so many coal-burning power plants. This is not pie-in-the sky stuff. It’s encouraging. (Also screens on the last two days of the festival). 4 out of 5

LEAVE THEM LAUGHING: John Zaritsky, the Oscar winner who lives among us, is back with another edgy documentary. Edgy and funny. It lets us spend time with Carla Zilbersmith, a singer, actor and comedian who kept the songs and jokes flowing even though she suffered from ALS. We watch her sing in a club accompanied by a small combo and tell stories that people long ago might have called ribald. There, at home alone, at a religious theme park and on her blog, she expounds on many things: sex, her condom collection, her image of God and her love of life. It’s that spirit not her impending fate that you’ll take from this film. Since it was finished, she has died, at age 47 in California. She was born here in Vancouver. (Also screens Sunday)  3 ½ out of 5

MADE IN DAGENHAM: Sally Hawkins plays a fighter for gender equality in 1968 England. She leads a three week strike at a Ford Plant, grows from a modest seamstress into an empowered woman and helps usher in an Equal Pay Act.

Bob Hoskins plays a union leader who has a cozy deal with management (represented by Rupert Graves) and Rosamund Pike (also seen in Barney’s Vision) plays a manager’s wife also is also awakening. No local previews but a good source tells me this is a rousing crowd pleaser even though it telegraphs everything before it comes. (Also screen next Saturday)

13 ASSASSINS: This samurai epic from festival favorite Miike Takashi has been getting raves at festivals in Venice and Toronto. Especially for a mammoth battle sequence that goes on non-stop for three quarters of an hour.

This is a re-make of a black and white film from 1963. An elite group of samurai are enlisted to topple an evil Lord. They set a series of traps in a mountain village he’ll be passing through but when he and his army arrive, find they’re outnumbered 15-1. That brings on that huge battle fought with swords, showers of arrows and explosions. At least one writer has gone so far to claim it positions Takashi as a worthy successor to the pre-eminent director of samurai films, Akira Kurosawa. (Also screens Tuesday).

YELLOW BITTERN: The Life and Times of Liam Clancy: He tells it all himself. Fame and big record sales with his brothers and Tommy Makem, a chance meeting that turns into a love affair with a folk song collector who later reveals she’s actually a Guggenheim, friendship and praise from Bob Dylan, money problems when the success fades. Plus a revival for Liam in Calgary. It’s not as dramatic or lurid as so many other musician biographies, but Liam is such a mesmerizing storyteller that he makes even ordinary anecdotes come alive. He spent five years working on this and died only three months after it was premiered in Dublin last year. (Also Oct 7 and 13).  3 ½ out of 5