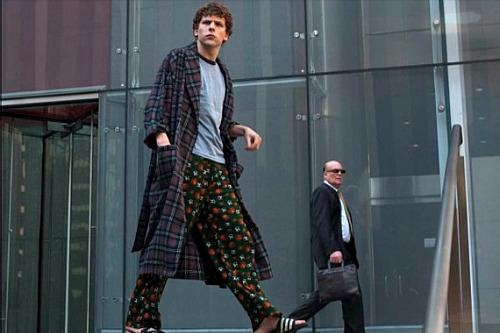 Jesse Eisenberg plays a man who changed the world. He created Facebook. Woody Allen is back but not at his best. Two cult favorites are back in new versions and there’s some great dancing in 3D.

THE SOCIAL NETWORK: Would it surprise you to learn that Facebook was originally created for guys who want to get laid? That’s the claim here, and it’s made by the founder himself, Mark Zuckerberg, as portrayed by Jesse Eisenberg. He was just another solitary geek with a computer, working in his dorm at Harvard University. He set up a network to hold votes on who were the hottest women on campus. Now, only seven years later he’s a billionaire and Facebook is everywhere. Five hundred million people and many corporations use it (even now a local realtor, I notice) and for many it’s replacing e-mail. This film makes invigorating drama out of that rise. With a smart script by Aaron Sorkin (TV’s The West Wing) and firm direction by David Fincher (Zodiac, Seven) it’s easily one of the best films of the year and is a cinch to be nominated in many categories.

The early scenes are full of the excitement of invention, reaching high and willing to defy anybody to succeed. A classic American business story. Then we twig on to a darker level. Zuckerberg comes off as a bit of sociopath, dumping his friends, turfing the pal who financed his start-up and maybe even swiping ideas from some others. It takes a while to realize we’re watching the story in flashback, from a couple of out-of-court mediation sessions. The supporting players include the next Lisbeth Salander (Rooney Mara), the new Spiderman (Andrew Garfield) and in a spectacular performance, Justin Timberlake as the know-it-all, promotion whiz Sean Parker, the guy who created Napster years ago and helped boost Facebook as its first president. Eisenberg holds the centre though. He’s compelling as an acerbic and socially inept Zuckerberg. If there’s a downside here, it’s that the film sticks to the story and makes no attempt to figure out what it means. (5th Avenue, Rio, Scotiabank and many suburban theatres)  4 ½ out of 5

YOU WILL MEET A TALL DARK STRANGER: Even second-rate Woody Allen movies are worth watching. He entertains even when the story is clumsy and the laughs are fewer.

His irony and wit are intact, just not as active as usual, in this London-based story about various types of renewal. Anthony Hopkins leaves his wife for a bombshell tart. The wife starts to believe in reincarnation as expounded by a fortune teller. Her daughter (Naomi Watts) is charmed by an art gallery owner (Antonio Banderas)  and is losing her husband (Josh Brolin) to a flirtation with a neighbor (Freida Pinto, as luminous as she was in Slumdog Millionaire). And there are still more hook ups in this crowd making for a busy film, often improbable, sometimes stretching for a joke, but amusing as a light diversion. (Tinseltown) 2 ½ out of 5

FUBAR II: The two so-called lovable losers in this film do exactly what James Cameron did this week. They make a showy visit to the Alberta tar sands. There’s smoke from one end of the horizon to the other. Bright lights are shining and giant machines are operating. It’s a vision of environmental hell. Our heroes don’t see that way, though. I don’t think they ponder such things, either for or against, even though on their way up there they ditch a hitchhiker because he’s going  to protest. The two headbangers played by Paul Spence and Dave Lawrence are going for the easy money and the beer and drugs it buys.