Easy A, The Town, Alpha and Omega, Cole, Devil, The Virginity Hit, plus Tati, the genius 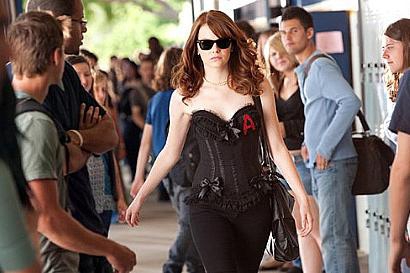 Here's a new star for your radar. Emma Stone entertains in the sparkly Easy A. Ben Affleck stars and directs in The Town, aka Boston where he's from. The wolves of Alberta, as imagined in L.A. and Mumbai, feature in Alpha and Omega  while B.C. looks great in Cole.

EASY A: Here’s a fresh take on a recurring genre: the high school comedy. You’ll have to think back to Clueless or Juno to match it’s wit and affectionate humor and while it’s not as classic as those two, it does come close.
Emma Stone plays a teen who inadvertently allows a rumor to spread that she’s started having sex. It brings her sudden popularity, which she enjoys, then notoriety, which she mocks by dressing provocatively and pinning on a red A. (She’s reading The Scarlet Letter in English class but the other teens don’t seem to get the reference). It leads to more rumors, each one wilder than the last and even a demonstration by the school Christian club with signs calling her a slut.
Amanda Bynes plays the club president and, therefore, her moral rival. Stanley Tucci and Patricia Clarkson are very funny as her laissez-faire parents. Ultimately, it’s her own call on how to react to the commotion. “John Hughes did not direct my life,” she laments. There are allusions to his and other teen films, smart worldly humor, clever dialogue and, amid some clunky sub-plots, a terrific performance by Stone. Remember her name. (Oakridge, Tinseltown, suburban theatres)
3 ½ out of 5

THE TOWN: Ben Affleck has become a good director with one main shortcoming. He can’t get a great acting performance out of himself. Surrounded by people like Rebecca Hall, Jeremy Renner (of The Hurt Locker) and Jon Hamm (of TV’s Mad Men), Ben is overshadowed; sincere but unremarkable.

He’s the brains in a gang of bank robbers in Boston, meticulous in carrying out the job (including impersonating cops) and proud of the result. “Six (armored) trucks and two banks,” he boasts.  Renner is his pal and cohort but with far less patience. He takes Hall as a hostage in one robbery and then sends Affleck to chat her up to find out what she knows. Of course, Ben falls in love, which sets up a major row between the two men. Still, there’s yet another job to do, a tense robbery at iconic Fenway Park which sends the film off into an entirely different direction: a car-crashing police chase (led by Hamm as an FBI special agent) through some very narrow streets  and a noisy machine gun shootout (started by Renner). Not at all new, silly at times, but still a good, tension-filled action-with-introspection film. (Park, Scoriabank and suburban theatres) (3 out of 5)