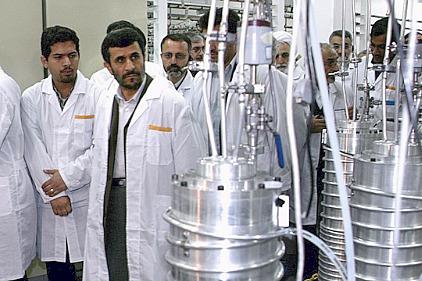 The president of Iran is as a potential threat with his nuclear ambitions, according to the new documentary Countdown to Zero. He’s not alone. It details many other A-bomb worries. Soul Kitchen and Winnebago Man have some laughs for you while Rob Reiner makes an unheralded return

FYI: How to live with the new parking rules at Tinseltown. The signs say you get two hours free, and have to pay $4 an hour beyond that. You can’t get through most movies, plus commercials and trailers in less than two hours so do you have to pay? I’m told that for movie goers, it’s still three free hours but that you should hold on to your ticket stub in case Impark, the new operators since September 1, give you a ticket. Apparently, you’ll be able to dispute it. I’ll be interested to hear if it works.

COUNTDOWN TO ZERO: Forget the horror movies, this is the scariest film around right now. It’s also more than a little alarmist and fear-mongering but ultimately useful in presenting a mass of disturbing evidence. In other words, this is a very effective documentary.

Who worries about the atom bomb these days? And intercontinental missiles. The Cold War is over and the number of nuclear weapons worldwide has been reduced from 60,000 to 23,000. They’re not down to zero, though, and this film details the ongoing threat. The leaders of Iran and North Korea are shown now and then to remind us of one angle. It’s more likely that terrorists are in the market for these weapons. The film points out how easy it is to build a bomb if you can get hold of all the material. It then recounts some disturbing cases of nuclear theft by underpaid and under-supervised workers in the former Soviet countries. Just as worrying is the possibility of a nuclear blast set off by mistake. The film lists a number of false alarms and accidents that have already happened. About one incident, an experts says “Fortunately Yeltsin wasn’t drunk.” Gorbachev recalls how Reagan’s star wars project scuttled one disarmament conference. There’s lots more in this chilling and well-researched essay and call to action directed by England’s Lucy Walker. Jeff Skoll the Canadian who used to head E-Bay is one of the producers. (Ridge Theatre)        4 out of 5

WINNEBAGO MAN: A friend at work used to have an audio tape of Orson Welles struggling his way through a commercial and repeatedly arguing with the director. He attacked him as a nobody and insulted him in vitriolic but clean language. It was very funny to hear. Move ahead a few decades and there’s Jack Rebney.

He’s become a sensation on You Tube for some outtakes from an industrial film for Winnebago RVs that he struggled through one hot day about 30 years ago. Rebney’s obscenity-laden rants and occasional memorable phrases ("Will ya do me a kindness?") had circulated for years on VHS tape before bursting on to the internet. Filmmaker Ben Steinbauer was a fan and set out to find the man and the real story. His film has many funny moments and a few touching ones but few surprises. Rebney just happens to be one of those guys who cusses frequently, like a cranky uncle or a TV news director, which he used to be. He hates Dick Chaney, Wal-Mart and people pre-occupied with the internet. He’s blunt, articulate and likeable. The film, which early on recalls other  involuntary internet stars, chief among them “the Star Wars Kid” from Quebec, doesn’t delve very deeply into the phenomenon, except to suggest that people seem to enjoy watching a bit of humiliation on line.     (Tinseltown) 3 out of 5