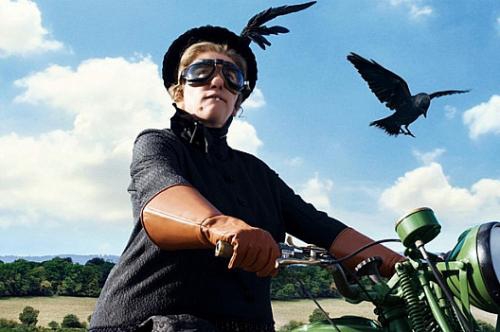 The list of new films is long this week. There are 10 of them but Nanny McPhee Returns, written by and starring Emma Thompson, tops them all.  Even Joan Rivers and a notorious French bank robber who carried on in Quebec for a time fall short.

NANNY McPHEE RETURNS: I was only mildly impressed by her first film, five years ago, but it made lots of money and I’m glad it did. It led to this second film which is in a word: wonderful.

Emma Thompson stars as the nanny with the facial wart, protruding tooth and no-nonsense attitude who uses magic to teach her lessons. That allows all manner of visual trickery that children will love. Pigs climbing trees? How about pigs in a synchronized water ballet? There’s also a baby elephant, a mischievous crow called Edelweiss, a cow and several goats that McPhee can choreograph at will. It helps create a charming, magical tone that’ll have you nostalgic for the classic films and books you encountered when you were young.

There are also serious issues in among the whimsy. The film deals with honor, courage, faith, loss through death, good vs. bad behavior and more, without moralizing and often with gentle humor. That’s a tribute to Emma Thompson in her other capacity. She wrote the script, again basing her character on the Nurse Matilda books, but this time writing an entirely original story.

Maggie Gyllenhaal plays an English farm wife whose husband is away at war. She’s got a house full of quarrelling kids–three of her own and two visiting big city snobs—and a brother-in-law trying to coerce her into selling the land to cover his gambling debts. Nanny McPhee has lots to do. Much of the film has the spirit of those beloved Ealing comedies although the best scene–a boy standing up to his stern father (Ralph Fiennes) who is high up in the war office—is chilly and moving. This is one of those films that you don’t want to end.
(Oakridge, Tinseltown and many suburban theatres) 4 out of 5

MESRINE: KILLER INSTINCT: Don't be surprised when the words "to be continued" suddenly pop up on the screen. You've been thoroughly engrossed in the film for two hours and there's been no warning that they constituted only the first half of the story. It's especially startling because it's a tale most of us have never heard of, although it is legendary in France and even has a Canadian chapter. Jacques Mesrine was a French criminal in the 1960s who had a flair for both violence and self-promotion. During one of his prison stays he wrote his autobiography, which is the basis for this virile, unflinching film. We see him argue with his "doormat" of a father, pistol whip a pimp, threaten and hit his own wife, lose his wedding ring in a poker game, rob banks and kill people.

Vincent Cassel, in a strong performance that even equals the great Gérard Depardieu as his criminal mentor, manages to make Mesrine a fascinating character with just a bit of self-doubt hiding behind a lot of bravado. He also succeeds at overcoming our qualms about his reprehensible side. Mesrine dumps his wife and takes up with a prostitute (Cécile de France) on a crime spree that extends to Arizona and then Montreal. There he associates with an FLQ member (Roy Dupuis), robs two banks in one day, bungles a kidnapping and lands in prison. The film takes a brutal shift at that point as he’s gassed, beaten and left naked in solitary confinement. Then it’s back to the adventure with a tense prison break and, remarkably, an attempt to break back INTO prison. That’s a lot of story and some of it jumps ahead too abruptly. Most of it, though, is very well told.
(Tinseltown)  3 1/2 out of 5

JOAN RIVERS: A PIECE OF WORK: If you can remember her appearances on Johnny Carson’s show and those red carpet specials, you’re going to be shocked at how foul-mouthed that “comedy icon” Joan Rivers can be. And regularly is it seems, judging from the stage appearances and off-stage conversations we see in this startling documentary. There’s one in particular, a gig in a Wisconsin casino that turns into a supremely nasty shouting match with a man in the audience. It pretty well undoes whatever nice feelings you have about the funny lady and gives you a good measure of just how truthful and candid this film is.