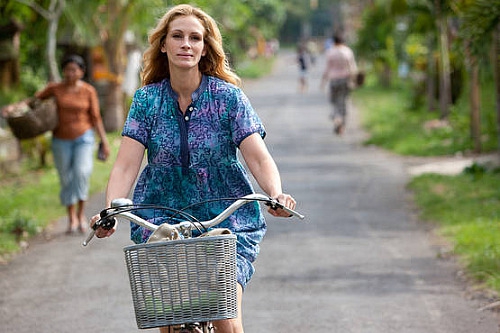 This week we’ve got Julia Roberts on a woman’s tour of self-fulfillment, and Sylvester Stallone as a man’s man blowing things up or Michael Cera in video game action for the young crowd. Topping them all, though, are two films about family, one from Australia, the other from Japan.

EAT PRAY LOVE: The book has a huge cult following, mostly of women who claim to have been seduced by its charms. I don’t see the same powerful drive in the film, which is gorgeous to see, likeable in many ways but a bit low in passion. And yet that’s what’s supposed to be at it’s heart.

Julia Roberts plays Elizabeth Gilbert, the New York magazine writer who documented her attempts to bring zest back into her life. “I need to be unnerved,” she tells a lover before divorcing her husband and going travelling.

Stop one: Italy, where she learns to enjoy food again, makes new friends and has a fulfilling tourist experience. No surprises, but it was comfortable. Stop two: India where she enters an ashram for meditation, floor scrubbing and some actual soul-searching. She can’t quite connect, though, until a man from Texas (Richard Jenkins) offers advice like “just let it be”  and in a moving bit of acting shares a shameful incident from his past. She concludes that because God dwells within it’s alright to take care of herself first and heads on to Bali.

That’s where she finds love, if she is open to it, with a Brazilian who inadvertently runs her off the road with his truck. He’s played by Spanish hunk Javier Bardem, in exquisite sensitive macho form. Will she end up with him? Only a thousand movies with similar decisive moments will tell.

The film softens her character from the book and the sunny acting by Julia Roberts gives her an amiable sheen. But neither can undo the pervasive feeling that we’re watching one supremely self-absorbed individual. Her search for herself and for enlightenment turns up pithy aphorisms that even she compares to bumpersticker wisdom. It’s light, easy to take in and most probably even inspiring for many. I Am Love, still in theatres with another story of a woman’s escape, is far more intense. Eat Pray Love is a vacation.
(Scotiabank and many suburban theatres) 3 out of 5

SCOTT PILGRIM VS. THE WORLD: They’re really pumped for this one in Toronto, especially the National Post, which has been running a feature article every day this week. No wonder. The film and the comic book series it comes from are set there. Local sights like Casa Loma, Honest Ed’s and those familiar annex streets are on screen as themselves. Everything is draped in snow.

Michael Cera repeats himself by playing the title character much like the guys he played in Juno and Superbad. He falls for a young woman named Ramona Flowers (Mary Elizabeth Winstead) newly arrived from New York but soon has to battle her ex-boyfriends who seem to object to the relationship. No real reason given, but that may be unnecessary because the story is built like a video game. Seven exes are like seven levels. Each battle becomes a fantasy scene with bright colors, super fast editing, sound effects spelled out in print and scores flashing on screen. The look is definitely innovative and the film entertains.

Fans of the comics should especially enjoy this one because the spirit is intact, although with six volumes crammed into one movie, there’s a lot going on and little time for reflection. The tale is kept moving fast and brightly by English director Edgar Wright. He made Shaun of the Dead and Hot Fuzz, two wild comedies and cult favorites. This one isn’t as inspired and loony as those two but it does have great fun with the video game motif (e.g. the music for the opening studio logo is done Nintendo style) and the film does represent accurately the mood of young adults in their early 20s. The story between the battles is shown in cool slacker-movie style. Kieran Culkin plays a gay roommate and Jason Schwartzman is the chief ex. He’s great at sneering self-importantly. The story climaxes at a battle of the bands, amateurs all and sounding like it, although performing original songs by Beck and others.
(Tinseltown, The Dolphin, and several theatres in the suburbs) 3 ½ out of 5