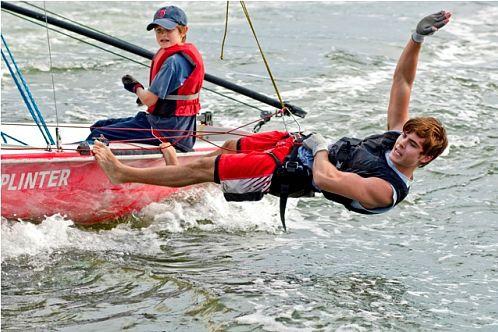 That's Zac Efron up there sailing in British Columbia waters.  It's in his new movie Charlie St. Cloud filmed around here exactly one year ago. Young fans will swoon. Steve Carell's fans will enjoy his clueless antics in Dinner with Schmucks but will children lap up the second Cats and Dogs film? And is there enough Afghanistan in a new war film?

RESTREPO: This documentary takes you so close inside the Afghanistan war, you’re practically looking down the American soldiers’ rifle scopes with them. You feel their fear, their boredom and their zest for action. Great, but now, especially after the Wikileaks documents, we really need more. Context for instance. How the war is really going. How the soldiers feel about it. How it affects the Aghanis in the nearby villages. We get very little of that. The film  was made by Sebastian Junger (writer of The Perfect Storm) and cameraman Tim Hetherington. Five times over a 14-month period, they were embedded in a platoon fighting in the dangerous Korengal Valley. The title refers to the base camp, named after a popular comrade killed in action.

There are some amazing scenes, like the meeting in which a US captain asks some village elders to identify the local Taliban members. He tells them he’ll help them get rich. Good luck with that, captain. An earlier scene has a soldier decry the difficulties of fighting where family, cultural and religious ties so closely bind the good and the bad guys together. There’s also the matter of a cow from the village the soldiers cooked and ate. The film has a lot of shaky camera work but also intimate scenes of roughhousing, everyday life and a few hard fought battles. We hear the soldiers’ memories in interviews done later. The main impression I got is that those old war movies were accurate. Soldiers don’t think very deeply about the job. They just do it. The closest the film comes to evaluating the war is a postscript. It says the U.S. has now abandoned the valley. (5th Avenue Cinemas) 3 ½ out of 5

DINNER FOR SCHMUCKS: This one you can judge by the title. It’s not subtle, often crass and frequently (but not consistently) funny. Paul Rudd and Steve Carell star in a familiar movie plot—mismatched guys forced together by circumstance. Rudd is ambitious and needs an “idiot” to bring to a dinner his boss (Bruce Greenwood) is holding. Carell fits the bill. He’s an amateur taxidermist who creates fanciful dioramas with stuffed mice. He’s also a naïve innocent who takes everything literally which before long leads to Rudd’s apartment, love life and best business deal all trashed. The dinner, which takes forever to come (and never did happen in the hit French film this is loosely based on) brings on a poignant and entirely predictable turnaround.

The whole film deals in obvious comic situations like that. Unlike the original, which skewered the pretensions of snobs, this one pulls its punches. It’s a pleasant enough summer comedy, neither satirical nor particularly mean-spirited, which is odd considering that Jay Roach also directed all three Austin Powers movies. It has slow spots and  doesn’t match the rambunctious fun of  last year’s The Hangover, although Zach Galifianakis, who became a star there, is also in here, in a small role. The break-through this time is by Jemaine Clement (of TV’s Flight of the Conchords) as a self-possessed and very weird artist and hedonist. He’s a secondary character who gets more screen time than he warrants because he is very funny. (Scotiabank and many suburban theatres)  3 out of 5


CHARLIE ST. CLOUD: Zac Efron moves beyond his High School Musical films but is still playing to the same young-girl crowd. I can’t see too much of a different audience for this. You have to be romantic and wistful and maybe a fan of the popular novel this comes from, but willing to forgive some streamlining changes. Zac as Charlie is grieving the death of his young brother in a car accident. To stay close to him, he takes a job tending the cemetery and every evening meets him in a forest clearing to toss a baseball back and forth. Is he special as Ray Liotta, of all people, suggests as part of some inspirational advice or, in the words of another character, “totally certifiable?”  No matter. The mood is right for an emotive essay about the difficulties of moving on. Charlie meets a young woman who is into sailing, as he used to be. She’s effectively played by Amanda Crew, the Langley actor slowly becoming a name in the movies.