Inception, The Kids Are All Right, The Sorcerer’s Apprentice, plus music and Brazilian films 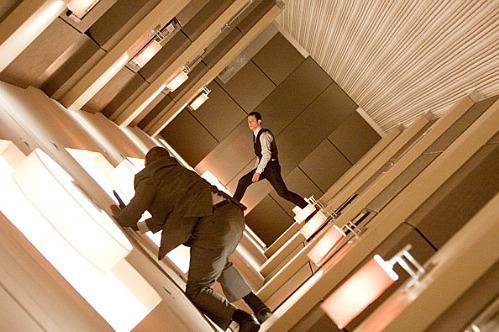 Life gets strange and tilted in the mysterious Inception. It gets very modern in The Kids Are All Right. But The Sorcerer’s Apprentice has to look way back for inspiration. While you’re at it, check out what’s doing at the VanCity Theatre.

INCEPTION: If you can make it through the first 15-20 minutes, you'll be OK. They're the most elusive in this intricate enigma of a movie. Leonardo DiCaprio comes to on a beach. He steals from a safe, but did he get blank pages or confidential documents? He's in somebody else’s dream, but it starts collapsing. Is it a dream with in a dream and how can he conduct himself when he’s in there? In fact, how did he get in there? Christopher Nolan did this to us once before with his mysterious Memento before making the straightforward super hit The Dark Knight. In a second act he goes overboard with exposition and then finally gets to the heart of this thriller, an intricately planned heist, of sorts. DiCaprio assembles a team, including a chemist, a forger, a right-hand man (Joseph Gordon-Levitt) and a psychology student/maze designer (Ellen Page) to invade the dreams of the heir to an energy corporation. At the request of a competitor, they want to plant an idea--that’s the inception—to inspire him break up his conglomerate. Yes, these are industrial spies we’re watching.

DiCaprio is beset by guilt as he works and his deceased wife (played by Marion Cotillard) enters his dreams at inopportune times. That, and his desire to get back home to his two children, adds a touch of sentiment to this mostly cool and dispassionate film. Enjoy the puzzle though and the amazing action sequences and special effects. My favorite was DiCaprio’s demonstration of how to manipulate a dream. He causes a Paris street to fold up overhead, buildings, moving traffic and all. A climactic sequence has the team operating on three levels of a dream simultaneously. They’re in a van, in an elevator, and in a gunfight on an avalanche-prone mountain (filmed in Alberta) all at the same time. It’s not a masterpiece but it is well-acted and wonderfully visualized. Just remember to pay attention. Even Ellen Page has to ask at one point: “Who’s subconscious are we going into, exactly.”

Trivia: Page and Cotillard were both up for Best Actress Oscars two years ago. Cotillard won. (At theatres all over, including The Park, Dunbar, Rio and Scotiabank). 4 out of 5

THE KIDS ARE ALL RIGHT: Families are changing so we’re going to get more films like this. Not many as good though, as well-observed, as well-acted and as accurate in depicting how real people behave. Annette Bening and Julianne Moore play a comfortable lesbian couple whose lives are thrown off balance by a man (Mark Ruffalo). Their teenage children bring him around because as a sperm donor years before, he is their father, sort of.

There’s an awkward but friendly enough first dinner and subsequent encounters gradually reveal some major differences (he’s a university drop out, now running an organic market garden; Bening is a high-achieving control freak) but also some similarities (they’re both Joni Mitchell fans). These comparisons are done with easy-going humor and a great deal of humanity. Developments come at a nicely comfortable pace. Moore, the passive and under-achieving one in the house, awakens, both professionally and otherwise, when she’s around him. Bening and Moore, who earlier had a hot sex scene as they were watching some gay porn, argue about him just as any couple might. Lisa Cholodenko, who wrote and directed, wisely doesn’t turn these two into angels or the film to advocating a life-style. Nor does she write artificial personality changes for her characters. A mean-spirited speech near the end was just waiting to come out. It’s an honest film.  (5th Avenue Cinemas) 4 out of 5