The Girl Who Played with Fire, Despicable Me, Wild Grass 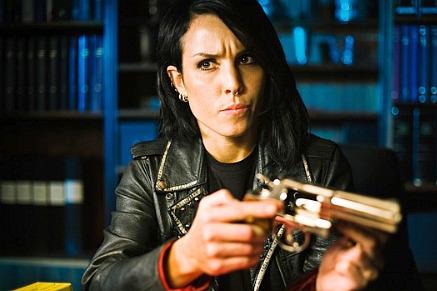 The second film in the blockbuster Millenium series is here. Lisbeth Salander is accused of murder and we learn her back story. Drunkard brothers and stalking romantics feature in two other imported films while there are big animated laughs in Despicable Me.

THE GIRL WHO PLAYED WITH FIRE: This second film in the trilogy was originally made for television, so don’t expect another one as great as The Girl With the Dragon Tattoo. There’s less tension, there’s less sense of discovery drawing you in and the pace and editing are not as crisp. Also, the limitations of the novels, entertaining as they are, become more apparent with improbabilities and coincidence. Still, it’s another good yarn told here, one that again takes us down into some grimy depths of Swedish society. This time it’s the sex trade worked by women imported from Eastern Europe and run by Russian gangsters. (The third film will show how the trade reaches up into high levels of government).

Lisbeth Salander and Michael Blomkvist don’t even meet in this one until the last few minutes, but their lives are again entangled. He (played by Michael Nyqvist) is working with a freelancer on an expose. She (again played with grit and toughness by Noomi Rapace) is hiding from three murder charges, one for her rapist parole officer, two connected to the expose. Before it's over, she’ll be shot and stabbed, bringing considerably more blood than we’re used to into the film. We also get a heavy sex scene with her girlfriend to balance her role. Most importantly we learn about her background, including that firebombing that was only briefly shown in the first scene. It is again fascinating storytelling, partly because it’s driven by these strong characters. There are a couple of scenes though that seem like they’re straight out of the old movie serials. They cause a dent or two in the credibility of the film, but leave the entertainment value  intact. (5th Avenue, Tinseltown and three other theatres). 3 ½ out of 5

DESPICABLE ME: Toy Story 3 is still around and here’s another very good animated romp. This one is even less for children, though. They won’t get jokes like the Godfather reference, the  villain’s advice to his minions to “seek other employment options” or “The Bank of Evil, Formerly Lehman Brothers”. The film is stocked with goofy adult humor, even a merciless parody of dumb children’s books. Kids will get other elements though, the contest between two villains to be the biggest of earth, and the three little orphans who test the resolve and the heart of one of the contestants.

Steve Carell is the voice of Gru who’s being tabbed an old, has-been in the villain game. He’s got a project he thinks will bring him back though, stealing the moon. Dr. Nefario (Russell Brand) and a whole flock of tiny yellow drones called “minions” are working with him, while Vector (Jason Segel) is his smug competitor. Julie Andrews voices his dismissive mother, who the story makes clear caused him to turn to villainy in the first place. His family sentiments are re-awaked by three little girls who he adopts to be part of his scheme.

There are lots of funny scenes as they disrupt his life and several giant spectacles as the adventure sets in. I kept thinking of the James Bond film Moonraker. The scenes are that big. The animation is excellent and for once it’s worth paying extra to see the 3-D version. (Tinseltown, Oakridge and many suburban theatres) 4 out of 5