Twilight #3 is big, the newly restored Metropolis is bigger and Cyrus is oddball fun 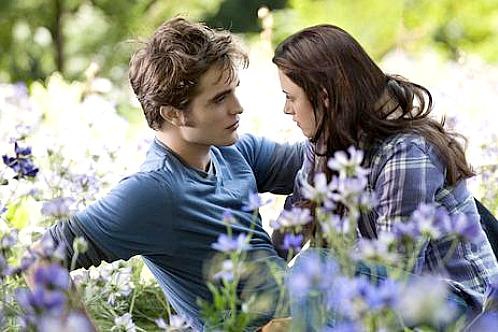 The news and the hype have been non-stop about these two. He’s a vampire. She’s ready. The third Twilight film heats up the romance. Meanwhile Cyrus has a major attachment to his mother, Metropolis returns with 25 lost minutes restored and The Last Airbender gets ponderous.

THE TWILIGHT SAGA: ECLIPSE: It’s the third in the series and Bella finally decides between the cool vampire and the hot werewolf to be her boyfriend. It takes her the whole film, with lots of back and forth, and in a  temperature-raising first, passionate kisses with each of them. She (Kristen Stewart) practically offers herself to Edward (Robert Pattinson) but he turns out to be a proponent of abstinence. That’s him with her among the flowers above, where she quotes Robert Frost on desire: “I hold with those who favor fire.”

She gets a well-articulated appeal of the fiery kind from Jacob (Taylor Lautner) including this caution about joining Edward’s vampire family: “Bella, they’re not even alive.” Is that a clincher? Too early to say. The debate had hardly started at that point and that’s a problem with this film. It drags as these heartfelt but shallow talks go on and on. Meanwhile, everybody is slow to see that “something terrible is coming”. That would be a small army of “newborns”, freshly-turned and still-wild vampires on their way from Seattle to get Bella. There’s far too little suspense as that threat grows although the battles that follow are good. In total, the film is more violent than the first two, a little darker and more direct about Bella’s real teenage yearnings. Stewart is again fine in the role while Pattinson shows extra shades of pale, both in his complexion and his acting. Taylor Lautner is now likable. He was annoying last time. As you surely must know, this was filmed in and about Vancouver. (Oakridge, Rio, Scotiabank and 17 other theatres between here and Chilliwack)  2 1/2 out of 5

CYRUS: Jonah Hill has been in a batch of both good and bad comedies, most recently  Get Him to the Greek. Now he shows he can act, and even keep up with a couple of real troupers, John C. Reilly and Marisa Tomei. Hill has to play intelligent, ingenuous, creepy and narcissistic as a 21-year-old who still lives at home with his mother (Tomei) and schemes to keep a suitor (Reilly) away from her. He carries it off perfectly. He’s amiable, then petulant, then eerie and possibly menacing. Thank the sharp script and direction by brothers Jay and Mark Duplass. They’re big in the small corner of independent filmmaking called “mumblecore”. This is their first film with a sizeable budget.

Reilly is a hoot as a loner at a party where he unexpectedly meets up with Tomei. They start a tentative relationship that feels like real life, except for many quirky touches you don’t see coming but make sense anyway. Chief among them is a mother-son co-dependence that’s subtly drawn but still unsettling. This is a romantic comedy, albeit a warped one, then a story of trepidation when Hill tries his sabotage and later a test of wills. It’s all presented with very natural dialogue and keen observation of character. It’s quietly funny and very edgy. Don’t expect everything to be cleared up at the end though. Some of it is, but not all. (5th Avenue Cinemas) 3 ½ out of 5

METROPOLIS: It’s a restored antique but sure doesn’t play that way. This is the classic Fritz Lang silent film from 1927, a celebrated model of German expressionism and modernism, rescued from a butchering that cut it short by almost an hour. Seeing it back on the big screen, I was impressed by how modern it really is, how fast the story moves along, how briskly it’s edited and how good most of it looks. Countless sci fi movies and music videos have been influenced by its iconic images, the futuristic city, the workers trudging like in an avant garde ballet, the female robot’s provocative dance, the light circles moving up and down her torso.

There have been a number of reconstructions over the years as lost footage was found. This version, showing for the first time in Canada, has all but eight minutes back in place after a complete but heavily damaged original print was discovered in Argentina. The re-inserted scenes are easy to identify; they’re streaked and scratchy.  Some are like those deleted scenes on movie DVDs. You can see why they were deemed expendable. Others though, add much.