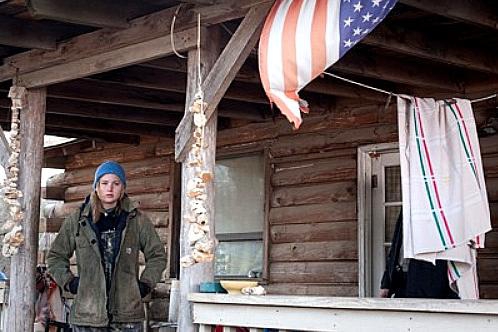 What did Jennifer Lawrence get this week that Tom Cruise and Adam Sandler didn’t? Great reviews for her work in Winter’s Bone. Also read about Coco and Igor, a Broken Social Scene concert film and a batch of other movie events coming this week.

WINTER’S BONE: Don’t miss this one, partly because you’re bound to hear much more about it come award season (it has already won two big ones at Sundance) and mostly because it is one of the two or three best films of the year so far. It’s bleak and occasionally harrowing but with such a strong pulse of real life that it’s not only watchable but thoroughly riveting. The setting is southern Missouri, the Ozark Mountains, the land of hillbillies and old timey music, an image  recalled in a brief musical interlude with Marideth Sisco, a retired journalist and student of the local culture, leading a group of guitar, banjo and fiddle players at a house party. That image is shattered though by the story here. Jennifer Lawrence plays a teenager caring for two siblings and an invalid mother but searching for her father. He had put up the family home for bail on a drug charge and then disappeared. The quest brings us scenes of rural poverty, family loyalty, a code of silence and a drug culture based on cooking and using methamphetamine. The film feels absolutely authentic. It’s based on a local novel and the director, Debra Granik, spent weeks researching in the region to ensure she was getting it right. The script is lean and tight and perfectly played by the actors, especially Lawrence who gives a subtle and assured performance as a very determined woman. (5th Avenue Cinemas) 4 ½ out of 5

COCO CHANEL AND IGOR STRAVINSKY: The two rebels, she in fashion, he in music, had a brief affair in Paris in the 1920s - apparently. This film, thanks to the active imagination of the British novelist and screenwriter Chris Greenhalgh shows how that may have played out. An affair of convenience it seems to have been. Coco, as played by Anna Mouglalis, is head-strong and in mourning. Igor, played by Mads Mikkelsen, is passive and, with a TB-suffering wife, an easy conquest.

We see the attraction but even with four sex scenes (one on a piano bench) the film is a bit low on real passion. It suggests the two inspired each other professionally. That’s hard to see too. She only chooses and doesn’t create the scent labeled Number 5. He’s mostly brooding. Still, this is a beautiful production, exquisitely designed and boasting two huge plusses. First there’s the subtle performance of  Russian actress Elena Morozova as Stravinsky's quietly suffering wife. And second there’s the grand opening sequence that brilliantly re-creates the infamous near riot when his “Rite of Spring” was debuted in 1913. (Part of The Ridge Theatre’s French Film Festival). 3 out of 5

KNIGHT AND DAY: The people at 20th Century Fox have had to work extra hard to get this film on people’s radar. Tom Cruise isn’t the draw he used to be, not even with Cameron Diaz in tow. Don’t worry though. The movie is pretty good summer fun even if the basic idea has been done better before and the story is riddled with glitches of logic that test your willingness to suspend your disbelief. Cruise plays a CIA agent who may have gone rogue, or may be on the run from the real rogue. Diaz, who he draws into the hunt, is trying to figure out exactly what he is through the whole film, through car chases, flipping SUV’s on the freeway, a shootout on a plane, another one in a Brooklyn shipyard, a wild motorcycle escape (and shootout, naturally), action in Austria and even a pursuit by the bulls in Spain. The stunts are wild and extravagant.

The two leads are entertaining as they banter along the way. Cruise’s character may also be a bit crazy. He certainly acts that way, probably playing on his real-life image. Diaz is likeable as the woman caught up in his antics although she becomes adept awfully fast at firing guns. She can also travel internationally without so much as a passport. Multiple writers worked on this over many years. That may account for the jarring flaws in the story, the biggest of which is the device everybody is after: a new battery said to be “a perpetual energy source.” A fact check with any physicist would have shown that’s impossible. (Scotiabank  and suburban theatres)  3 out of 5