The 80s are back with The Karate Kid and The A-Team. Or you can look far back to a woman's struggle in 400 A.D. 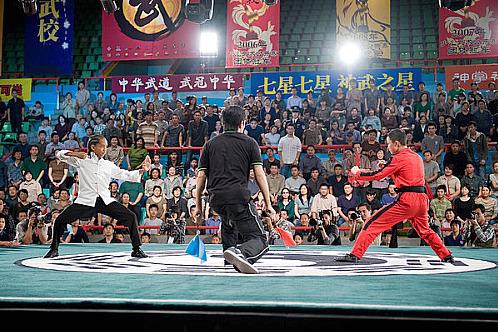 It used to be the 1950s, now it's the 80s the movies are bringing back, with films like The Karate Kid. You can also take a movie time trip further back to the civil rights struggles of the 1960s and the pagan vs Christians battles of the late Roman era. Or stay right now with Excited or Mother and Child.

THE KARATE KID: It was a major hit 26 years ago, spawned three sequels and now comes back in a shiny new version. The good news is it works. The mood, the performances and the message (“Life may knock us down but we can choose to get back up”) combine for a decent inspirational tale.  Jaden Smith, Will’s son, is confident in the role Ralph Macchio made famous. He’s taken to China where he’s charmed by a violin-playing girl, bullied by a jealous punk and taught kung fu (not karate) by a run down maintenance man (Jackie Chan) who claims it’s a technique for peace. Jaden just wants to whup the bully in a big tournament. The film has a nice deliberate pace working through the initial culture shock and the training, up to that showdown. Note two issues, though. At 140 minutes, the film is long, due partly to several colorful side trips to tourist attractions like the Great Wall and the Forbidden City. And the fighting, both in the schoolyard and the kung fu arena, gets quite violent. A rival instructor sets that tone with his maxim, “We do not stop when our enemy is down.” That’s far more severe than the original a generation ago.
(Oakridge, Scotiabank, Dolphin, and 10 suburban theatres) 3 out of 5

THE A-TEAM: This re-grouping of the popular TV squad from the 1980s just wants to entertain. And it does, if you’re up for a mindless summer blast to eat popcorn to. The action is big and often outrageously cartoonish, most famously when the guys are “trying to fly” a tank that’s fallen out of a plane. A sequence I liked better was a spectacular escape and chase down the side of a tall office tower, possibly on Burrard Street, one of the many locations from here to Kamloops used in the film. Liam Neeson now heads the team as cigar-chomping Hannibal while a UFC fighter, Quinton 'Rampage' Jackson, takes over from Mr. T. and two actors who hit it big last year, Bradley Cooper (The Hangover) and Sharlto Copley (District 9) fill out the quartet. They all do the job more than adequately. The story updates and pretty much matches what the series used to do. The team is framed (in Iraq this time, not Viet Nam) and on the run, from among other people, Jessica Biel, the first woman given a significant role. There’s rough boy humor, lots of stuff exploding and containers on a cargo ship tossed around like toy bricks.
(Oakridge, Scotiabank and many suburban theatres). 3 out of 5

MOTHER AND CHILD: Let’s celebrate a when a film brings us real characters, living out real lives and real crises. This film is a quiet but emotionally devastating example. It links the lives of three women over the issue of motherhood.

Annette Bening plays an aloof physical therapist who sets out to find the daughter she gave up for adoption when she was a teenager. Naomi Watts is clearly that daughter, just as cold in manner and a hard-driving lawyer. Kerry Washington plays a woman who can’t have children and wants to adopt. Their stories unspool separately - Naomi sleeps with her boss Samuel L. Jackson, Annette pushes Jimmy Smits away, Kerry tries to make a deal with a pregnant teen - and finally twist together in a conclusion that’s a bit too convenient but mostly satisfying and tragic. The relationships these women have with the people around them and the theme of mother-daughter love drive this movie. The performances by the main cast plus a large number of secondary characters are all tops.
(5th Avenue)  3 ½ out of 5

AGORA: Unusual for this time of year, here’s a film of ideas. Too many perhaps. They clash with each other and also struggle for supremacy against the sword-and-sandal events going on at the same time. It’s an odd coexistence.