Rock goes wild in Get Him To The Greek, dogs talk in Marmaduke, and geneticists play God in Splice 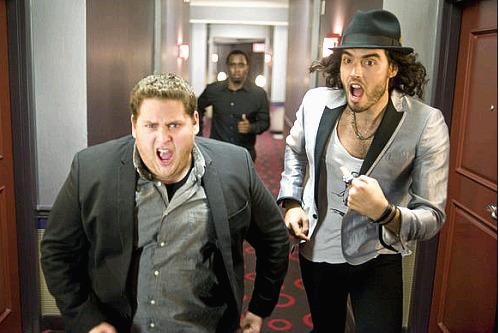 A rampaging rock star, some Killers hiding from the media, a genetically-created creature and a herd of talking dogs are your escapist choices this week. For a dose of reality think about weapons in space or a cult Canadian rock band

GET HIM TO THE GREEK: Remember the randy English rock star in Forgetting Sarah Marshall? Aldous Snow, as played by Russell Brand, was outrageous and funny, but also obnoxious. Here he’s spun off into a full movie of his own guided by the same director,  Nicholas Stoller who wisely keeps him somewhat in check and on the whole away from becoming annoying. The result is a very funny rock and roll romp with the added benefit of a shrewd view of the music business. Jonah Hill plays a gofer to a music promoter played by Sean Combs, the former Puff Daddy, P Diddy or whatever he’s calling himself these days. (That’s him chasing our boys in the picture above). Hill has to fetch Brand in London and get him to Los Angeles in time for an anniversary concert. But he finds him distracted by drugs, partying, his narcissism and recent failures. His last album had an African theme but was slammed as “the worst thing for Africa since apartheid.”  The trip is stalled, interrupted or waylaid by a pub crawl, a gross idea to fool airport security, much partying and a side trip to Las Vegas.

That’s where Snow reunites with his father (Colm Meaney) in a terrific sequence that over an evening of drinking moves from tender bantering to fighting. The film, produced by Judd Apatow, has sharp snappy dialogue with plenty of cultural references, a long list of celebrity cameos (Pink, Christina Aguilera, Kurt Loder and others) and thankfully not too much of the vulgar humor these films throw about these days. (Tinseltown and many suburban theatres) 3 ½ out of 5

PAX AMERICANA AND THE WEAPONIZATION OF SPACE: Just a week and a half ago this subject made the news. An amateur satellite tracker caught sight of the X-37, a super-secret plane the U.S. has orbiting the earth. Its stated goal is defensive only, but you’ll feel plenty of doubt after watching this unsettling new documentary. Weapons of mass destruction are banned from space, but not lesser weapons. The US has a huge annual budget for those.

Elements in the US military want to stay dominant out there because they fear a surprise attack from space. Satellite transmissions could be disrupted in an “electronic Pearl Harbor.”  The Chinese have already practiced by shooting down an old weather satellite. The possible scenario in this film envisions the shutdown of all communications, GPS, even cell phones, leading to air accidents and traffic chaos. Ex-military and government types plus commentators like Noam Chomsky and protesters like Martin Sheen make the case for and against (mostly against) space weapons. One calls the project a long-running fraud. Archival clips take us through Reagan’s Star Wars SDI (later revived by George Bush), the space race that Sputnik started, and even back to Hitler’s V2 rockets. It’s a comprehensive survey, a little too fear mongering at times but ultimately more intellectual than urgent and scary. This is a France-Canada co-production with Vancouver input. Mark Achbar (The Corporation)  and Betsy Carson were Executive Producers. (VanCity Theatre)  3 ½ out of 5

SPLICE: Gene-splicing took a big step towards creating artificial life recently according to a major news story. How timely. This film is about the same subject, including the morality of human beings playing God. But despite the presence of an Oscar winner (Adrien Brody), an Oscar nominee (Sarah Polley) and some oversight by Guillermo del Toro (creator of Pan's Labyrinth) as executive producer, this is just a creepy movie that gets frantically overwrought and scientifically ludicrous.