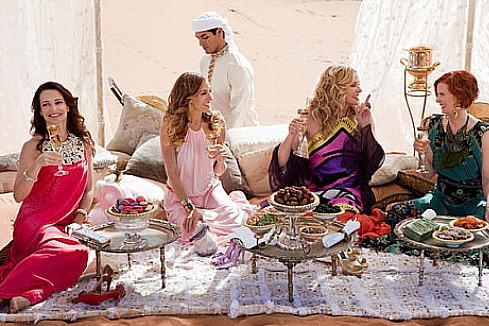 The popular TV series begat a movie the critics didn't like but the fans turned into a huge hit. Now we have the second Sex and the City film and again the crowds are turning out. The Maid offers a more realistic woman's tale and for action fans there's Jake Gyllenhaal as a retro swashbuckler in Prince of Persia.  For that pure "awww" factor,  there's Babies.


SEX AND THE CITY 2: Just look at the many shows already sold out and all the girls night out parties. This film is a strutting hit. Whatever I say won’t make a difference. However, here goes anyway. This film is not very good. It’s vapid and too long for the material it has. If you want lots of fashion and another dose of the true worth of this series, the celebration of woman’s friendship, you’ll be happy. If you want more, it’s not there. The friendship isn’t even put to a test, which would have brought some drama into this tale. Instead, it lingers in sit-com territory both in New York, where Carrie’s marriage has reached a “terrible twos” stage - Big likes lying around watching TV, you see - and on vacation in Abu Dhabi. The four women are invited to experience “the new Middle East” but neither the people nor the culture seem to interest them. As Samantha puts it, “We need to go somewhere rich.”  Even the dazzling luxury is only a brief diversion. They’ve brought their regular issues with them. Carrie (Sarah Jessica Parker) runs into an old boyfriend and frets after they kiss. Charlotte (Kristin Davis) worries about her sexy new nanny and her husband back home. Miranda (Cynthia Nixon) quotes from a guidebook and Samantha (Kim Cattrall) doesn’t listen. She offends the locals with her sexy dress and behavior. She’s almost a caricature cougar now and refers to one hot guy as “Lawrence of my labia”. Even worse, the trip seems to have no lasting effect on the women. Travel is supposed to broaden you, isn’t it? On the plus side, the film has a bright colorful air, opening with a lively gay wedding where Liza Minnelli sings a Beyonce song, including a movie premiere where Myley Cyrus and Penelope Cruz briefly appear, and all throughout with lots of that “sparkle” that Carrie calls for.
(5th Avenue, Dunbar, Scotiabank and many suburban theatres)  2 ½ out of 5


PRINCE OF PERSIA: THE SANDS OF TIME: This one had me thinking back to those swashbuckler films from Universal-International of years ago. Stars like John Derek or Tony Curtis would be flashing the sword and scaling castle walls, fighting, romancing and never hiding their American speech patterns. A few things have changed.