Shrek is back one last time; Michael Caine takes out the trash and Bollywood aims high with Kites 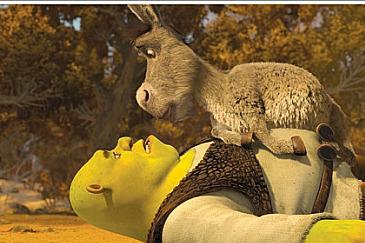 Nostalgia is in again. The movies this week take you back to the 80s, the 70, the 60s, and in a warped way to the fairy tales of your childhood. And watch Bollywood try a big move onto the world stage.

SHREK FOREVER AFTER: There’s been a lot of grousing about this 4th (and apparently last) outing of the nice-guy ogre. The series is tired; he’s worn out, they say. I don’t see it that way. I like this the best of the four. The first was novel (and won an Academy Award), the second was more of the same and the third was dull. This one is bright and lively, with a good story and lots of inventive touches. Best of all, those hip pop culture references are now muted and reduced in number. Shrek, now a husband and father, wants his old wild life back. Rumpelstiltskin shows him a way but it’s a trick.

He’s gets one day in a parallel world where not even his donkey friend or his wife Fiona know him. Then he’s to die, he learns. Puss in Boots is grown fat, flocks of witches control the sky (and a nightclub) and ogres fight back with an underground resistance movement. And there’s more, making this tale far too complex for little kids. This is for people who want another  mildly askew session with the fairy tale characters of their youth. The Pied Piper is one of the new arrivals here. It’s best to know them and the previous films to really enjoy this one. Mike Myers, Cameron Diaz and Eddie Murphy are back in good voice form while story artist and writer Walt Dohrn is terrific as Rumpelstiltskin. The 3-D doesn’t add much. Also shown in 2-D and IMAX. (The Park, Scotiabank, Dolphin and many suburban theatres).  3 ½ out of 5

HARRY BROWN: Vigilante films are hard to resist. They get your blood boiling against some loathsome low-lifes and have you rooting for some possibly helpless victim to get back at them. Charles Bronson and Clint Eastwood have both done it and don’t forget Dustin Hoffman in Straw Dogs. Now also from England, here’s Michael Caine fulfilling all the requirements for this type of film  as he outlined them in a New Yorker interview. He’s old, a widower, loses a friend to the young hoodlums that control the night and the highway underpass at his council estate housing project and, conveniently, is an ex-Marine with experience in Northern Ireland.

Caine gives a very strong, yet calm, performance as he moves from quiet outrage to fighting back. The film is extremely well-made and atmospheric with paranoia. A bleak sense of menace grows into sharp, quick bouts of violence. In an especially chilling sequence, Harry goes to buy a gun from a couple of drug-addled dealers and ends up burning their place down. Yes, the film gets excessive in various scenes including one echo of some Iraq-war torture and later a full-scale riot caused by the ineffectual police. Emily Mortimer plays a sympathetic cop and Ben Drew, aka the singer known as Plan B, is particularly effective as a nasty thug. The message is reprehensible but the film is good. (Tinseltown)  3 1/2 out of 5

Child prostitution in Mumbai is the focus of BAS! Beyond the Red Light, winner of Colin Low Award at DOXA