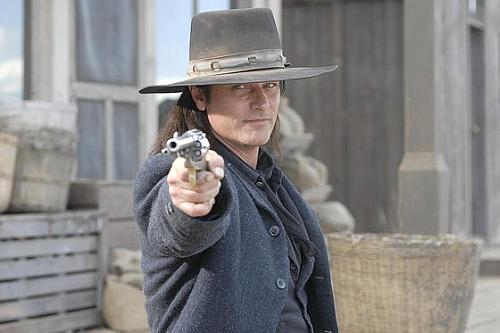 There are lots of guns in Gunless, angry animals in Furry Vengeance, a strange family trek in New Zealand and union lawyers taking on Coca Cola in Columbia. They lead the list this week, unless you're a Freddy Krueger fan.

NOTE: The following is incomplete because I'm travelling and wrote this days ago. Two films, for instance, are without ratings because I haven't seen them yet.

GUNLESS: I love westerns and I like championing Canadian films. I wish I could be more enthusiastic about this one. It’s even a local product, filmed in Osoyoos, with a scene at Fort Langley, and co-produced by Vancouver’s Brightlight Pictures. Like some other films from that company it’s presented well, is quite entertaining but doesn’t quite work. Its stab at making fun of both Canadians and Americans is too shallow.

Paul Gross plays an American gunslinger who’s on the run from bounty hunters. He arrives in a tiny Canadian settlement and immediately warms to a farm woman (Sienna Guillory) and picks a fight with the blacksmith. Through the rest of the film he tries to lure him into a gunfight all the while learning that his wild west code doesn’t apply up here. That theme, while noteworthy, is developed much too obviously, through broad humor and a teacher pronouncing: “We are what we do.”  Then, it fades into the background as, oddly for a film called Gunless, an amazing number of guns start blasting away in a big battle in the town’s only street. On the plus side there is a pleasing laid-back comic performance from Gross; a snarling impact by Callum Keith Rennie as the leader of the bounty hunters (yes, they eventually arrive) and a bright-eyed young Mountie (Dustin Milligan). He feels authentic because he reminds me of my brother-in-law when he was fresh in the RCMP. Good actors all, but an inconsistent movie.
2 1/2 out of 5

THE COCA COLA CASE: If the company had their way, this film wouldn’t be shown. They’ve threatened legal action against the producers claiming it is both inaccurate and violates a confidentiality agreement. It’s been shown on campuses (including Langara back in January) and now the VanCity Theatre screens it four times this week. What’s got Coca Cola upset is the account of a dirty anti-union campaign going on at its operations in Columbia. As the film tells it, over 400 organizers have been assassinated by death squads. The evidence is mostly circumstantial but forcefully laid out by union leaders and a lawyer pursuing a case in a U.S. court. A few low-level employees describe the conditions they work under.

The company side (a denial, of course) comes in video clips from an annual shareholders meeting where the CEO had to answer questions from the floor. There’s also a campus demonstration by students supporting Coke and an activist’s interview with CBC Radio in Edmonton. Very interesting stuff, even if it’s not an air-tight case. Produced in Montreal in association with the National Film Board.
(VanCity Theatre) 3 1/2 out of 5

THIS WAY OF LIFE: A lot of people were more impressed than I was with this documentary from New Zealand. It played at last year's film festival. It's scenic but somewhat baffling. A man and his family are forced out of their home (in some sort of dispute with his own father). They head to the mountains in pursuit of a simple life and almost total freedom.

Six children grow up on the edge between independence and calamity. There's deep meaning there for some, and beautiful visuals for everyone. Director and cinematographer Tom Burstyn is a Canadian who started with the National Film Board.
(VanCity Theatre) 2 1/2 out of 5

FURRY VENGEANCE: I’m with the animals in this one. They’re much smarter than any of the humans and cleverly resourceful in fighting for their homes. Brendan Fraser, on the other hand, plays a spineless project manager at a new housing development in Oregon. He’s clearing away the forest, even authorizing a beaver dam’s destruction and yet declares, “We’re a green company.” A relevant issue these days, but this film mangles it badly. Almost everybody overacts, including Brooke Shields as his wife and Ken Jeong, who made such a big impression in The Hangover, as his boss.

The animals, led by a wily raccoon who communicates with noises we see as thought balloons like in the comics, stage a series of incidents to sabotage the project. That leads to a lot of pratfalls, bonks on the heads and accidents. Fraser and his humans act silly and stupid in their reactions.
(2 out of 5)

PASSENGER SIDE: This Canadian film got tremendous reviews at last year’s Toronto film festival from publications that enjoy quirky independent films and alternative music. A writer agrees to drive his drug-addict brother around Los Angeles. They bickering all the way, even discuss hockey at one point, and meet a number of strange people along the way. A surprising secret destination is in store.

Montreal-born filmmaker Matt Bissonnette  wrote and directed it and cast his own brother, Joel, as the passenger. Adam Scott plays the driver. Their talks have been praised as both very funny and true to how brothers interact. As they talk there’s a mix tape playing with songs by Wilco, Smog, Leonard Cohen and many others assembled by an indie icon Mac McCaughan of the band Superchunk.
(Tinseltown)

A NIGHTMARE ON ELM STREET: It was a huge hit in 1984, produced seven sequels and is back again. So, what’s new in the never ending story of Freddy Krueger, the serial killer with metal claws in his gloves and a habit of terrorizing teens in their dreams? Well, they call it a re-imagining. I’d say don’t expect much. The people behind this one have already remade four other horror favorites. All were entirely forgettable. The director is a rock video veteran and most of the cast are TV actors. But there is Freddy himself. He’s now played by Jackie Earle Haley who is an expert at being creepy. Remember he was the sex offender who was chased out of the playground swimming pool in Little Children four years ago.
(At multiple theatres)