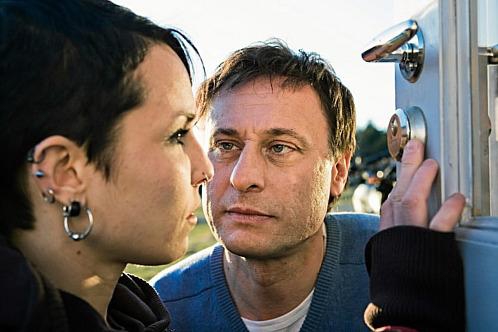 Do you have much time left after hockey these days? The movies have some ideas for you: one of the best mystery adaptations ever, a comic book hero who's not really super and a slam bam dust up at a funeral. Please notice also the two festivals of films about the environment.

THE GIRL WITH THE DRAGON TATTOO: Prepare to be amazed. This long and complex novel from Sweden has been turned into an absolutely engrossing movie. The 2 ½ hours glide by and even with the subtitles you hardly notice the time. You’re so wrapped up in the twists and turns and the revelations in this good old-style mystery in modern form. There’s even a dangerous spot midway when the story seems to turn upside down. No harm done; the film stays right on course. It’s very close to the best-selling book, a person who’s read it tells me, adding with much delight that the “girl”, Salander, the punkish computer hacker, is portrayed perfectly.

The story is what police call a cold case. An investigative journalist (Michael Nyqvist), with some time on his hands before going to jail on a libel charge, is hired by an industrialist to find out who killed his niece 40 years earlier. The were lots of suspects in the family at the time, including three Nazi-sympathizing brothers, but no body and no apparent way the young woman could have simply gone away. (Just like a classic locked-door mystery). Salander, played with cool precision by Noomi Rapace, joins the search with her laptop and hacking skills. Nyquist works the old way, talking to people, studying old photographs from a newspaper office and a woman’s honeymoon pictures. What they turn up is chilling, somewhat overwrought but ultimately, in its logic and credibility, satisfying. Careful, though, there’s a grim misogynist theme, a prolonged, violent rape and an equally-strong retaliation. If you can take them, you’re in for a very good film. (5th Avenue, Scotiabank and 3 suburban multiplexes). 4 ½ out of 5

KICK-ASS: “Go see Kick-Ass,” the guy shouted coming down the stairs. “It’s the best movie EVER.” Well, not quite. The guy might have been a bit too susceptible to the major buzz that has been building about this film. There’s controversy too, not that he’d be moved by that, I suspect.

That noise is about the Hit Girl character played by Chloe Moretz, a 12-year-old who swears like a sailor as she offs bad guys with knives, guns and any other weapon she can find. She’s been  trained to kill by her dad (Nicolas Cage), a super hero named Big Daddy but really an ex-cop bitter about his discharge from the force engineered by a crime boss coke dealer (Mark Strong). The film is cheerfully violent and often very funny, not a parody of comic book superheroes, but more an appreciation aimed at fans who know the conventions. So, a geeky high school student (Aaron Johnson) sends away for a costume and becomes a crime fighter known as Kick-Ass. He’s not too effective in the streets but a hit on the internet. Yet another hero emerges, Red Mist, but he’s the son of and working for the crime boss. The film is spirited and in a juvenile way quite smart. The violence, even when the bazooka is brought out, is comic, not real. (At theatres all over including The Ridge, Dunbar, Oakridge and Scotiabank)  3 out of 5

THE ECLIPSE: There’s a literate love story in this film. There’s also a scary ghost story and they don’t work together very well. The romance is actually a triangle. Ciarán Hinds plays a widower who works as a volunteer driver at an annual writer’s festival in a small Irish village. That puts him in contact with both a hotshot and boorish American novelist (Aidan Quinn) and a woman who writes tales of the supernatural (Danish actress Iben Hjejle). The two writers once had a night together which gives Quinn the idea he’s entitled to more. Hinds, though, starts seeing ghosts, including one grossly bloody one of his still-alive father-in-law. That's jarring in this otherwise calm film about mature people. Still, it gives him an in to talk to and get close to her. How long do you think before the two men turn to fisticuffs? Quinn overacts. The other two are restrained. Not a lot feels real. (Tinseltown)  2 ½ out of 5