Miley Cyrus, clashing titans and a bunch of plastic toys are new in theatres 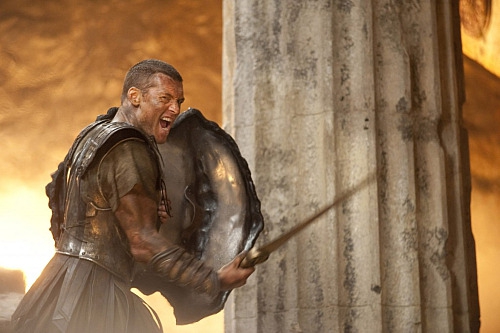 The Greek myths are back on the big screen as Sam Worthington battles Zeus and Hades, the original Olympians. Also new for you this week, there’s World War II, young love or adventure in a toybox.

CLASH OF THE TITANS: If the trailer made you think this film is cheesy and maybe on the ridiculous side, you were right. This is Greek mythology as plodding, heavy-handed bombast with a couple of top-drawer thespians overacting and a recent star hardly acting at all. That’s the Avatar guy, Sam Worthington, as Perseus. He’s an inexpressive demigod who’s swept up in a people’s revolt against the gods, including his father Zeus, played with booming importance by Liam Neeson, and Hades, the boss of the underworld, played by Ralph Fiennes basically repeating his Lord Voldemort. The film itself is a repeat. It’s a remake of a 1981 movie and follows its basic plot line very closely but tinkers nonsensically with a lot of details. What it does get right are the special effects. There are giant scorpions, Medusa with her hair of snakes and an attack by the huge sea monster called the Kraken. Oddly, although well-done, they don’t add up to a great deal of fun. The action scenes are  hard to follow and shoddy 3-D doesn’t help. (Don’t pay extra for it. Go 2-D). The film starts out looking like the Rome TV series (Polly Walker even has a brief role) and then turns into a Lord of the Rings clone. A second rate one.  (3D at Scotiabank and other multiplexes; 2D at Oakridge, The Van East, The Dolphin and several other theatres). 2 out of 5.

A TOWN CALLED PANIC: This could become a cult film. It’s trippy and nostalgic, quirky and a little weird, but most of all creative. Imagine five-year-old children playing out elaborate adventures with their toys and action figures. Then imagine two Belgian animators all grown up but still able to play, only now they have hundreds of little figurines and a movie camera. With the stop-motion technique they make a series of shorts for TV and now this full-length feature, a puppetoon if you will.

The story features three central characters (plastic, of course). Cowboy and Indian decide to build a barbeque as a birthday present for their pal, Horse. Through an on-line ordering mistake they get 50 million bricks (not 50) and through a series of increasingly wilder turns in the plot they find themselves under the sea, at the earth’s core, in the Arctic with a snowball-tossing robot penguin, and more. Parachuting cows, perhaps? It feels like the creators just wrote in whatever toys they got hold of. The result is very funny, with action and dialogue that’s speedy to frantic. There’s also a sweet love-story as Horse is smitten with a music teacher who wants him to join her class to sharpen up his piano playing. It’s all absurd, preposterous and a great deal of fun. The movie is safe for kids, but note that it’s in French and the subtitles come so fast they may prove elusive. (At the Pacific Cinematheque ) 3 1/2 out of 5

THE LAST SONG: To a certain crowd (that's the Hannah Montana fans) she's a superstar. Now, Miley Cyrus is trying to show she's grown up and can play more mature roles, although in this movie, she's only taken a small step forward. She plays a petulant brat, a teenager who's stopped playing piano and rejected a top music school because she’s angry at her dad (Greg Kinnear). He divorced her mother and now she and her brother are sent to spend the summer with him at a beach house in Georgia (the state, not the country). Since she won’t talk to him, she busies herself guarding some sea turtle eggs from the raccoons or reading Tolstoy down by the docks. Wouldn’t you know it, a handsome hunk (Liam Hemsworth, from Australia) shows up and accidentally spills her milkshake. But that’s not all. He’s a beach volleyball player who also knows about sea turtles and can quote Tolstoy.

For 12-year-old girls it’s a great fantasy, and eventually a tearjerker that will have them weeping happily. For others its another melodrama from a Nicholas Sparks novel, with most of his favorite story elements. There are class differences, family tensions and illness all in aid of manipulating our emotions. It worked in The Notebook and not so well in the recent Dear John, which made a fortune at the box office anyway. In this new one, it again doesn’t work quite so well. It feels manufactured, rather than real life. Miley Cyrus is pleasing enough to watch though for her spunky screen presence. (Tinseltown and 11 other area theatres). 2 ½ out of 5

MAX MANUS: Norway’s big hit movie and Academy Award entry has a fresh story to tell us and is worth seeing for that reason alone. The way it’s told, though, has some problems. Manus was a resistance fighter in World War II, unknown to most of us but legendary in Norway. He was a saboteur. The Germans called him a terrorist. His biggest coup was blowing up the German transport ship, The Donau, in Oslo harbour early in 1945. The film recreates that and other exploits in tense scenes heavy with suspense. There are also some good action sequences as he and his cohorts are hunted in the streets.

The problems come in between because after a rousing start, the film gradually loses momentum as events and details pile up. Manus gets a taste of war in Finland and suffers occasional flashbacks. Returning home he’s offended that his country is under occupation and after a time publishing leaflets gets bomb making training in Scotland (in Canada too, but that’s not included). Norway’s top actor, Aksel Hennie, is very good on that personal journey to reckless fighter and killer but the script doesn’t give us much about what that change means to him. Or about the morality. On the other side, the local German commander is just not menacing enough. He’s almost a nice guy (most of the time). When Manus meets him face to face late in the film, he concludes that war is hard on both of them. Fair enough but this film should be more involving than it is. (Tinseltown) 3 out of 5

WHY DID I GET MARRIED TOO: Tyler Perry brings a sequel to his hit comic drama from 2007. Four couples take another vacation, to the Bahamas this time, to renew (and analyze) their marriages. The complication this time is an ex-husband who barges in to reclaim his former wife now remarried. Janet Jackson and Jill Scott star.

No local previews for the media on this one. And the film is relegated to the Granville Theatre. Odd, since Perry’s films are always popular, in the U.S. at least. Also he now has extra stature. He championed the film Precious and made a good impression at the Academy Awards.