A Different Ben Stiller, a Rockin’ Neil Young and How to Train a Dragon Are New in Theatres, But Don’t Forget Mother 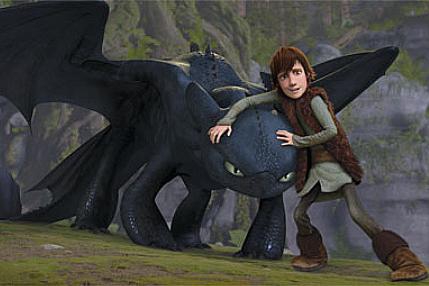 HOW TO TRAIN YOUR DRAGON: It’s an animated film but it plays like a giant spectacular. There are mammoth battle scenes, flocks of dragons attacking and huge, swooping flying sequences with a young boy hero, all presented in sparkling 3-D. And at the same time there’s a simple story about that boy seeking his father’s approval. Kids and adults will both like this one. The story, from a popular book, has a young Viking (voiced by Montreal’s Jay Baruchel) disappoint his father (Gerard Butler) by showing no ambitions or apparent abilities to kill dragons. In fact, he secretly befriends one and learns that the creatures are not hostile. That’s a challenge to the most basic beliefs within the colony and to the father who proclaims: “You are not my son.” Winning back his dad, gaining the respect of the village and turning around the snide comments of a cute girl (America Ferrera) drives the lively plot. The story is good, the animation is fabulous and you’ll find a refreshing absence of pop culture allusions. Dreamworks overdid those in films like Shrek. Oddly, the adults here have Scots accents while the teens are American. One even describes something as “cool”. It’s a minor flaw. There are scary scenes in this film, mostly startles, as when dragons suddenly pop into the picture, or a few close face-to-face encounters that little kids might find intimidating. (In 3-D at the 5th Avenue, Tinseltown and other theatres, and 2-D at the Dunbar and others). 4 out of 5

MOTHER: Note well the name Bong Joon-Ho. He’s from Korea and makes terrific movies. The Host was a huge hit in his home country and on many a 10-best-list over here. Now he’s brought us a bold and daring thriller about a mother’s love for her son. There’s more than a little  Hitchcock in this engrossing entertainment.

Hye-ja Kim, well-known for playing mothers on TV, puts a darker  twist on her character. When her son, who is mentally challenged and clumsy, gets himself charged with murdering a school girl, she sets out to find the real killer. That leads her through the interface between the country club set and slum dwellers, lazy cops and uninterested lawyers, teenage hoods and hookers, and more. Her search turns increasingly obsessive and we’re firmly drawn in. More than once, there’s a completely unexpected plot turn on the way to a surreal conclusion. The director spins a strong mood and loves to bring in broad changes in tone and bursts of ironic humor. With a light touch but tight control, he manages to make it all work. (Tinseltown) 4 out of 5

GREENBERG: How you react to this movie will be directly related to how you feel about the central character. And maybe about Ben Stiller. Greenberg is a complainer, about anything and everything. His friends say he lies and can’t joke about himself. Years ago he was in a band, but he scuttled a potential record deal in a fit of anti-corporate pique. Except for a bit of carpentry, he does nothing.