The Runaways, Repo Men and The Bounty Hunter Arrive in Theatres. Better to Take a Mid-August Lunch Instead 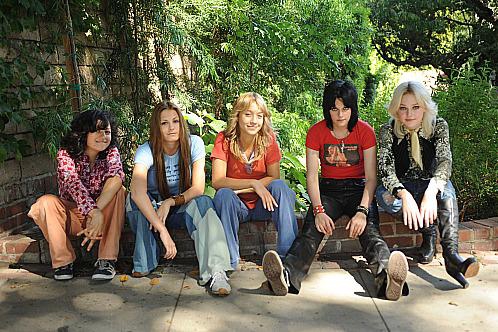 An almost-forgotten all-girl rock band storms back in The Runaways, thanks to Kristen Stewart's recess from the Twilight films. A bickering ex-couple in The Bounty Hunter and a bloody pair of Repo Men feature in the other big titles. Let me suggest, though, Mid-August Lunch for a more relaxed and generous view of humanity.


THE RUNAWAYS: This is a pretty good film about the pioneering all-girl rock band - as far as it goes, which isn’t far enough. Where it succeeds is in showing how these California teens broke into the boys’ world of rock and roll and the toll it took on them. They got caught up in something they couldn’t handle because they were still far from grown up. Kristen Stewart, between Twilight films, is tough as the leader, Joan Jett, and Dakota Fanning is damaged and vulnerable as the original lead singer, Cherie Curie, who wrote the book this is based on.

The film is short on facts, though. How successful were they? How many albums did they make? (It was five, by the way). How did  Cherie Curie progress so easily from goody-two-shoes to sex symbol performing in a corset? The answer would have been too grim to include and would run counter to the more lighthearted tone favored here. Even the lesbian scene between the two leads is short and discreet. In a documentary a few years ago, Cherie said she also got it on with the band’s drummer. Not here. There is an element of feminism and female empowerment but really, how much can there be when much of the story has a man coaching the girls to perform sexy to feed the fantasies of teen boys? And when that man, Michael Shannon, as the infamous producer Kim Fowley, steals every scene he’s in. Just watch him coach Dakota Fanning to snarl out the lyrics to the band’s big hit, Cherry Bomb. There’s lots of good music and bad language. (The Rio, Scotiabank and three other theatres). 3 out of 5

MID-AUGUST LUNCH: This is a short but wonderful gem from Italy. It’s only 75 minutes long but is chock full of wit and humanity and a comfortable relaxed tone. It helps to know that Italians celebrate a holiday on August 15 called Pranzo di Ferragosto. Apparently most just leave town that day. Since many also take care of aging parents, they have to find a place for them to stay. That’s why an unemployed man named Gianni is suddenly host to four old ladies, his own mother, his landlord’s, his doctor’s and her sister. They start out distant from each other, requesting individual rights, sometimes bickering. Gradually an understanding develops and grows into a camaraderie climaxing over a holiday feast, the host and several of the ladies have prepared.

The film is charming, often funny and always very Italian. (VanCity Theatre)  4 out of 5