New Films from Tim Burton, Roman Polanski, and a Couple of New Talents from Quebec Arrive in Town 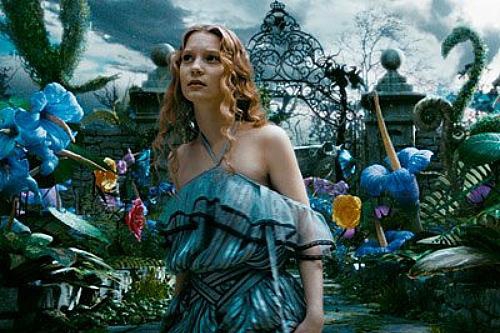 Alice is grown up and back in Wonderland

Now that the Olympics are over, you may have more time for the movies. You're going to need lots of it to see the new ones now playing. There are eight of them and they include some very good ones.


ALICE IN WONDERLAND: You won’t recognize this new Alice. She’s now 13 years older and something of a feminist icon. She starts by rejecting an upper-class twit’s marriage proposal and ends as a world-trade visionary. (Yes. Check it out). In between she makes a return visit to “Underland” eventually picking up sword and armor to battle a dragon (actually the Jabberwock, imported from a poem and not previously found down this rabbit hole).Tim Burton’s vision of life down there is darker than we’re used to. The first point of entry is all grey like a graveyard and the unremarkable 3D also adds a dim shading to much of the film. Some of the characters, notably Tweedledum and Tweedledee, are creepy. And the story reaches for Narnia or Lord of the Rings adventure, thereby all but losing both the satire and sense of wonder and, at times, the momentum.

That said there are plenty of dazzling visual sequences, beautifully designed and staged. There’s a great deal of energy here and the actors seem to be enjoying themselves, notably Johnny Depp as a particularly manic and weird Mad Hatter and Helena Bonham Carter who pretty-well steals the film as the Red Queen, even though she mostly yells “Off with their heads”. Mia Wasikowska from Australia is adequate but rather wispy as Alice. A long list of English character actors, including Michael Sheen, Stephen Fry, Alan Rickman and even Christopher Lee and Michael Gough, add their voices and considerable class to the proceedings. (At theatres all over, available in 2D, 3D IMAX and 3D, including The Park). 3 out of 5.

NOTE: The first ever version of Alice was made in 1903. The British Film Institute has the only surviving copy and recently put it on line. It’s less than 10 minutes long and partially damaged but a watchable curio. You can find it at <http://www.guardian.co.uk/film/filmblog/2010/mar/02/alice-in-wonderland-first-film>.


I KILLED MY MOTHER: No, he didn’t really. He just claimed she was dead to get out of a school assignment. It’s not physical but verbal abuse the teenage son draws on in this much lauded Quebec film that’s finally arrived here with a big reputation. It was a sensation at Cannes, a favorite at other festivals and Canada’s entry for the Academy Awards. Then it failed to make the short list and last week was all-but snubbed in our own Genie nominations. Still it’s a fine achievement for 21-year-old Xavier Dolan, who wrote, directed and stars in it.

This is a raw, emotional film about a love-hate relationship. He spouts non-stop vitriolic tirades at his mother about “your ignorant suburbanite expressions” and “your revolting clothes that make me want to barf.” She, played superbly by Quebec TV actor, Anne Dorval, mostly just takes it, which only infuriates him more. This is beyond teenage angst. She’s adept at guilting and manipulating. His inability to tell her he’s gay may have something to do with it and he comes off as self-absorbed, self-pitying and a spoiled brat. The film is uneven. It slows down in the later going and then delivers a resolution that feels too quick. Over all it’s a compelling and for all its noise a sensitive and often funny portrait of two living people. (VanCity Theatre). 3 ½ out of 5.


A PROPHET: This French film is nominated for an Academy Award in the foreign language category. It won the second-level prize at Cannes last summer and some say it should have won the top one. It’s easy to see why. It’s a spellbinding prison drama that grabs and holds you to follow several twists and chapters in the story of a young Arab who’s locked up and then coerced into working for the boss of a Corsican gang. He has to kill and do other jobs for the guy, who becomes something of a stern, tyrannical father figure. The relationship offers both protection and an education allowing the student to grow into a Mafia kingpin. The film spins levels of symbolism along with it’s stark reality and becomes almost poetic at it deftly juggles multiple story threads.
Tahar Rahim, as the young man, easily portrays his growth chapter by chapter from confused and broken to re-energized. It’s a star making performance. The film is long, 2 ½ hours, but never drags. (5th Avenue and Tinseltown). 4 out of 5.