Valentine’s Day, The Wolfman, Percy Jackson and Shah Rukh Khan Try to Compete with the Olympics 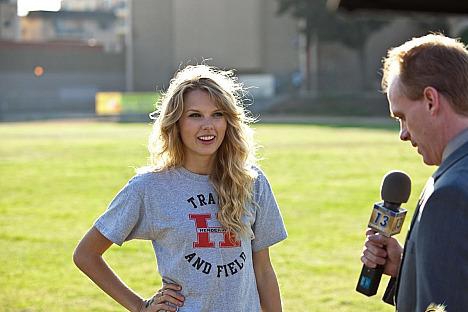 Taylor Swift turns from singer to actress in Valentine's Day

For the next few weeks, the Olympics will make this column less complete than usual. I’m a volunteer and won’t get to all the previews. This week there were three on the same night, and I went to none of them. I was at the dress rehearsal for the opening ceremonies instead. Can’t tell you much about it, except that it’s a fabulous show and I’ll be watching it again on TV. One thing I’ll say though: they’ve finally fixed the bad acoustics in BC Place. The muggy echoey sound was gone Wednesday night.

If you’re more interested in the movies than the Olympics, these are your newly-arrived choices. I’ve seen two of them.

VALENTINE'S DAY: This looks like an American Love Actually.  Several story lines criss-cross as various couples fall into and out of love. Maybe too many. They’re mostly short vignettes better for star watching than gaining insight. Patrick Dempsey plays a doctor (no surprise), but Ashton Kutcher a florist? And Anne Hathaway moonlighting at the Naughty Nymphos phone-sex line? There are plenty more, including Jessica Alba, Jennifer Garner, Queen Latifah, Shirley MacLaineJamie Foxx, Topher Grace, Taylor Lautner, Bradley Cooper and Julia Roberts. And not two weeks after winning big at the Grammy Awards, there’s Taylor Swift acting in a few short scenes. In one she explains to a TV reporter that she’s not a cheerleader, thereby echoing one of her hit songs. Celebrity magazines seem to have inspired this movie. (At theatres all over including The Rio, Dunbar, 5th Avenue, Tinseltown and Cineplexes)

THE WOLFMAN: What is Emily Blunt doing in this film? Fresh from her subtle work in The Young Victoria, although probably produced before, she appears in this super gory film. She’s admitted she almost threw up a few times watching it. Ostensibly an homage to old monster movies, this is a re-make of an outstanding film from 1941 although with modern special effects providing the gross out extras.

Benecio del Toro plays an aristocrat who turns into a werewolf after he returns to his ancestral village where something is killing the locals and is himself bitten by an animal. Anthony Hopkins plays his father and Emily his girlfriend. (At theatres all over the lower mainland)

PERCY JACKSON & the OLYMPIANS: THE LIGHTNING THIEF: No, not the athletes. The original Olympians. You know Zeus, Athena and all those Greek gods. This is from a bedtime story that spawned a series of five very popular teen novels. Percy (played by potential heart-throb Logan Lerman) is a troubled youth with a bad temper, dyslexia and a history of getting expelled from school. At a special camp, he finally learns the truth. He’s the son of Poseidon, god of the oceans.

He’s soon on the run from both gods and monsters who think he stole Zeus’ lightning bolt. Look for lots of action and name stars, like  Pierce Brosnan, Steve Coogan, Catherine Keener and Uma Thurman (as Medusa). There is a slim connection to our local events. It was filmed here in Vancouver. (Playing at theatres all over)

LOVE AND SAVAGERY: John H. Smith is back to issues in the church. In 1992, he made the acclaimed mini-series The Boys of St. Vincent. This time it’s not abuse he’s pondering but love and obligation. A geologist from Newfoundland (Allan Hawco) arrives in County Clare, Ireland to study rocks but finds a local barmaid (Sarah Greene) more interesting.

She, however, is to become a nun and he is twice beaten up by the local toughs when he continues his pursuit. He’s also a poet which charms her and brings on a crisis of conscience and temptation. The film is set in 1969 when stories like that had more impact than today. This one is too busy, with too many extra issues intruding. And you'll wonder where is the savagery. On the other hand, it’s well-directed, the scenery is beautiful, the villagers aren’t Irish stereotypes and newcomer Sarah Greene gives a charming performance that makes her dilemma believable. The script is by Newfoundland writer Des Walsh from his book of poetry published here in Vancouver by Talon Books. (Tinseltown)  2 1/2 out of 5

THE HORSE BOY: Here’s a fascinating documentary that’ll keep your attention because it’s so off-beat. It may raise some unrealistic hopes, though.

A young autistic boy from Texas is taken to Mongolia where his father (Englishman Rupert Isaacson) hopes to find a cure. His mother (Kristin Neff, an American psychology professor) is skeptical but goes along. There are harrowing scenes of non-stop temper tantrums and a surprise. The tantrums stop when the boy is on a horse. Some serious riding in Mongolia, a dip in a sacred lake and therapy by a powerful shaman may do even better. The trek is interrupted now and then by both flashbacks showing the family’s life and pithy comments from experts on autism. At the very least, you’ll learn a lot about the syndrome. (Ridge Theatre) 3 out of 5

MY NAME IS KHAN: Shah Rukh Khan is arguably the biggest movie star on earth. No wonder there was outrage in India last summer after he was humiliated by immigration officers at a New Jersey airport. He said he was picked on because he has brown skin and a Muslim name. Ironically, he was in the US at the time making this movie in which his character also suffers some of that racial profiling. He plays a mildly autistic man who arrives in San Francisco and experiences the aftermath of 9-11. His family breaks up and he travels the US trying to re-connect with his wife.

Look for more love story than politics in this film which also re-unites Khan  with Karan Johar, the director of some of his biggest hits. (Playing at the Raja, Riverport and Surrey Grande theatres)