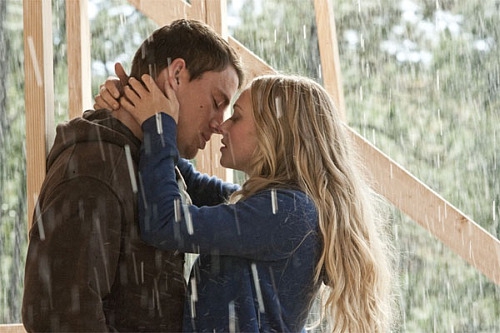 There are only three new movies opening this week, and not a gem among them. That’s OK. More time for those Oscar nominees crowding the theatres right now. Or maybe a new festival, you can read about below.

DEAR JOHN: Is this another emotional wringer like The Notebook?  It’s from the same author,  Nicholas Sparks, a fact the studio is hyping, and there is that passionate kissing scene in the rain which is all over the internet. It also has a similar theme: young love beset by one difficulty after another. This one, though, doesn’t have half the tear-producing power. Director Lasse Hallström does his usual best to keep the emotions well in check.  Also, the story is cumbersome. A young soldier meets a perky young woman; he goes back overseas, and after 9-11 extends his tour of duty. They keep in touch by writing letters. OK so far. But there’s more. He’s got an autistic father who suffers a stroke and she has a dying male friend with an autistic son. And that’s still not all. Load that much in and any story becomes unreal. The stars look good, though, and manage to generate quite a bit of chemistry amid the clutter. Channing Tatum is a hunk, best known previously for dancing or fighting in the movies, and Amanda Seyfried (she was the daughter in Mamma Mia) is wide-eyed charming. Curiously, neither she nor he and his army pals ever curse or swear. The whole movie is tame like that. (Oakridge, Scotia Bank and 13 other theatres). 2 1/2 out of 5

FROM PARIS WITH LOVE: Your reaction to this one will be directly proportional to how you feel about the concept “mindless,” as in the phrase “mindless fun”. Accept it, along with  some casual racism, a lot of American can-do bravado and loads of gunplay, and you’ve got a fast, compact action thriller.

John Travolta is fun to watch as a cocky CIA agent brought to the city of light to snuff out a bunch of Chinese drug traffickers and Pakistani terrorists. Just don’t ask how they can spray bullets at him and never hit while he can get anybody with one shot. He’s teamed up with a young embassy aide (Jonathan Rhys Meyers, on a break from The Tudors). With some captured cocaine to snort now and then and firing their guns and even a rocket launcher, they work their way through slums, restaurants, freeway chases and a diplomatic summit. There’s no depth to the story or the characters but there is a good in-joke, when Travolta gets to feed on a Royale With Cheese. (Tinseltown and 11 other lower mainland theatres)  2  out of 5

SAINT JOHN OF LAS VEGAS: A director’s first film and it shows. It looks cheap, is crammed with quirky characters and incidents and draws on a literary classic for inspiration, in this case Dante’s Inferno. Hue Rhodes has written he didn’t want to be too obvious in that connection. Well, he’s managed to make it so oblique you need his notes to understand it all. For instance, the naked nudists (including Tim Blake Nelson) with their burning arch over a dark road. That’s like the city of Dis, you see, in the sixth level of hell. It all just comes off as unnecessarily peculiar, but then so does the whole film.

Steve Buscemi plays a gambling addict who is reduced to a scratch-and-win habit and an insurance company job. He and a colleague are sent to investigate a claim for a car accident and meet a succession of odd characters, including a former stripper who is induced to give a lap dance from her wheelchair. Some of this stuff is funny; a lot of it is creepy. Several scenes just peter out as if the writers ran out of inspiration. And somebody who is normally edgy, comic Sarah Silverman, plays it uncharacteristically sweet as a co-worker with a happy face fetish. (Tinseltown)  2 out of 5

VIVA EL CINE MEXICANO: A festival of Mexican films starts at the Pacific Cinematheque next week to commemorate two anniversaries, independence 200 years ago and the revolution 100 years ago. And to display the roots of the recent upsurge in Mexican cinema. There are early works by Alfonso Cuarón, Guillermo del Toro and others, some key films dating back as far as 1934 and many from the 1990s. The series begins Wednesday with Midaq Alley which is not only one of the country’s most honored films but also Salma Hayak’s last film before she became an international star. Thursday has an interesting curio, Reed: Insurgent Mexico.

John Reed, the Communist writer portrayed by Warren Beatty in Reds, got his earliest radical education by riding with Pancho Villa in Mexico and filing stories to American papers. Odd to imagine Mexicans telling their own story through the eyes of an American reporter. He’s played by a Mexican actor speaking Spanish. You can find a complete list of all the 15 titles, with showtimes, film notes and reviews at http://www.cinematheque.bc.ca/.