God, Angels, and Science are Big this Week but a Black and White Award Winner Outdoes them All 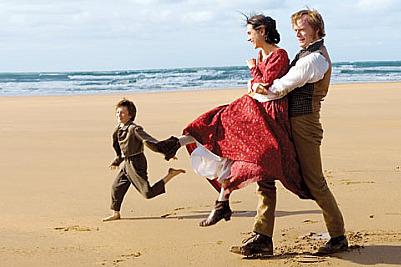 In two separate movies this week, Paul Bettany turns against God. He’s an angel refusing his orders in one, and Charles Darwin writing to demote him in the other. Maybe you prefer Harrison Ford as a research scientist or (surely not) The Rock as the tooth fairy. Better to try some quality and art from Austria’s favorite misanthrope.

THE WHITE RIBBON:
Michael Haneke from Austria won big awards both at Cannes and now the Golden Globes for this mesmerizing and beautifully staged examination of life in a German village just before World War One. True to his now-familiar inclination, he finds mostly unpleasantness, or as one character puts it, “malice, envy, apathy, brutality, persecutions and petty acts of revenge.” Only a school teacher and a nanny are nice people. A baron rules like in medieval times; a parson is a strict disciplinarian to his children; a doctor abuses both his midwife and his daughter. Somebody seriously injures him by tripping him off his horse, other accidents follow and fear sets in. A farm hand tries sabotage. The children move around mysteriously like a gang.

This village is over-loaded with problems but grim as it sounds, the film is so well-written, acted and photographed (in crisp black and white) that it’s utterly engrossing. What I don’t see, and I’ve watched it more than once, is how it represents the roots of fascism. Haneke has said it stems from “absolutism” in the villagers’ thinking. A stretch, I’d say, but worth discussing.
(Tinseltown, in subtitled German). 4 out of 5

CREATION:
When you think of all the shrill arguments Charles Darwin stirred up in the 150 years since he published “On The Origin of Species’’ it’s a wonder there isn’t more conflict in this film. Oh sure, biologist Tomas Huxley (played by Toby Jones) spouts a provocative line: “You have killed God. Good riddance to the vindictive old bugger”. That’s rare, though. Most of the film is much too calm calm as it looks at Darwin while he was forming his theories about natural selection. Paul Bettany does well conveying his personal struggles over the explosive ideas he was writing but the film turns ponderous. He treads softly around his God-fearing wife, Emma (Jennifer Connelly) and they manage only one good argument. All the while, he was grieving the death of a daughter and spoke with her in recurring visions. She encouraged him to get on with his work. That relationship is at this film’s centre and comes from a book by Darwin’s great grandson. While it’s refreshing, for a change, to see the scientist depicted as a family man and a humanist it’s also oddly off kilter. (Tinseltown)  2 ½ out of 5

LEGION:
In this one, God, in a fit of pique or something, sends his angels to destroy humanity in an apocalypse. Paul Bettany, as the Archangel Michael, opts instead to defy him and safeguard a waitress pregnant with a messiah. The action centers in a remote diner where reliable actors like Dennis Quaid, Charles S. Dutton and Lucas Black can help him do battle. A visual effects specialist directed and co-wrote.

NO MEDIA PREVIEWS, BUT WATCH THIS SPACE. LATE THIS AFTERNOON I’LL POST MY THOUGHTS.