The Twilight Saga, The Blind Side, and The Bad Lieutenant Top New Movies for Nov. 20 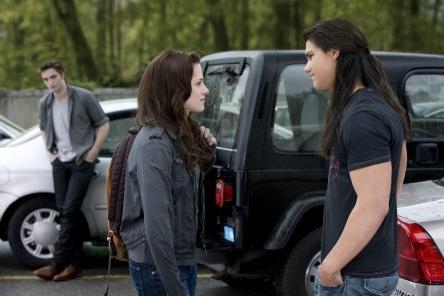 Did you ever see such hype and anticipation for a movie?
Magazine covers. Endless gossip. Newspapers counting down the days. Well it’s here and the young women fans love it. They whoop when Robert Pattinson appears and again when Bella’s new friend (Taylor Lautner) takes off his shirt. They find the film dreamy. Not that it matters that much, but I found quite a bit of it slow, short on both the angst and the sense of mystery and discovery of the first in the series. Pattinson as the vampire Edward Cullen does less acting and more brooding and posing in this one. Much of the time he’s away in Italy, having broken up with Bella and re-appearing only in her visions, until she goes after him. Kristen Stewart plays her very well, swooning effectively, then constantly in danger but unfazed even by hanging out with werewolves. In Italy she finds Michael Sheen heading up a vampire tribunal. The film gets  crowded with these new story elements. They don’t fit together easily. Still, it’s a safe vampire flick for teen girls and  here’s a thought for all of us. This is the second week in a row that the biggest movie on earth was made here  in Vancouver. (Showing on 1 out of every 5 movie screens in Canada)  3 out of 5

If you’re worried that Precious, coming next week, may be much too harsh, try this one. It’s essentially the same story, but much easier to take. Both films have  an oversize African American, silent, uncommunicative and damaged because of a terrible childhood, rescued by a caring woman and pressed to heal through education (and in this case: football). It’s the true story of Michael Oher, now a rookie playing with the Baltimore Ravens. As a teenager he was taken in by a Memphis family straight out of a Norman Rockwell painting. Dad is played by country singer Tim McGraw and mom is a no-nonsense energizer brought brilliantly to life by Sandra Bullock. She’s just as ready to talk back to a redneck in the bleachers as to a drug dealer in the projects. It’s wonderful, and not at all sentimental, to see her push Michael to open up and feel his worth. The film is very entertaining, light in tone, often funny and infused with humanity.
(At theatres all over) 3.5 out of 5.

PROM NIGHT IN MISSISSIPPI:
Even in the Obama era, a lot of old racial attitudes survive. This absorbing documentary visits the small town of Charleston to watch a test case unfold.

The local high school, which held separate senior proms, one for whites, one for blacks, was convinced to integrate the event last year. The film shows how that happened. Morgan Freeman, the actor and local resident, is seen before the school board offering to pay for it, and then appealing to the students in a quietly authoritative speech at an assembly. The students, in interviews as they prepare for the big night, offer up idealism, rebellion and sometimes apology: “My parents are racist but I love them”. The film's last section is the dance itself, lively, rockin' but probably just a first step. The 2009 official prom was again integrated, although in both years there was also an unofficial separate prom for whites. Showing at the Ridge Theatre. Director Paul Saltzman will be at both shows Friday and Saturday night and take questions. Rating: 3 ½ out of 5