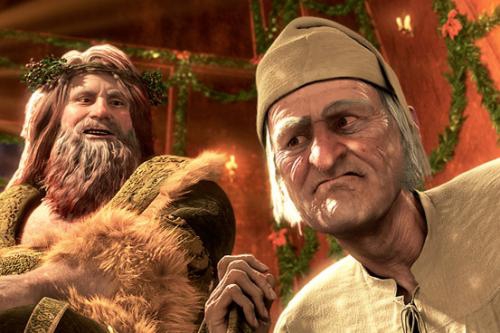 Jim Carrey as Ebenezer Scrooge and all three ghosts is terrific. The new A Christmas Carol film, not so much. It’s better than staring at goats, though. And there are other options.

A CHRISTMAS CAROL: This is the new Disney version (the third from that company) and therefore will probably draw the crowds. And why not? The beloved Dickens tale is now, in part, a speedy 3D thrill ride. Scrooge flies over London, soars way up into the atmosphere and down in the street has to out run a speeding hearse pulled by huge black horses. To make way for the razzle dazzle, part of the story has been cut. Scrooge’s childhood – the source of his “cold hearted” persona – is truncated and his early days in business aren’t shown at all. Taken together, that reduces the emotional heart of this movie and scenes drag because we’re not that involved. The film’s technique adds further distance. The motion-capture animation makes most of the characters look unreal, sometimes even weird. On the plus side, there’s Jim Carrey. He plays or voices Scrooge at five ages of his life as well as the three ghosts. And he’s fine. He seems to be  channeling Alastair Sim from the beloved and still superior 1951 British version. The wonderful dialogue from that film and from the original novel is all here but the new action scenes are far too intense for little kids. (At theatres all over)   3  out of 5

THE MEN WHO STARE AT GOATS: Here’s a black comedy that isn’t all that black or that funny. It has some excellent performances though from George Clooney, Ewan McGregor, Jeff Bridges and Kevin Spacey. It just doesn’t amount to much, even though it claims to be based on real events. Apparently the US military got into psychic and paranormal experiments back in the 1970s. McGregor, as a reporter, stumbles on the information years later as well as an original participant, Clooney.  Who, on an obscure mission into Iraq, tells him all about the originator (Bridges, seen in flashbacks). The whole idea of soldier hippies getting into new age philosophy to create monk warriors is hard to believe. The script doesn’t help much with that and may simply be saying that the program begat the psychological torture used in the war on terror. There are funny bits, though, one showing an encounter between two private security forces in a village street. (At theatres all over). 2 1/2 out of 5

THE DAMNED UNITED: Even people not usually drawn to sports movies should like this. The setting is British soccer; the story is really about arrogance and obsession. Back in the 1970s, Brian Clough has a short stint coaching Leeds United. He had big successes before and after, but couldn’t lead that team. He was a victim of cocky self-assurance and a driving need to pay back an old slight. The film turns his story into high drama. Michael Sheen stars and Peter Morgan wrote the script. Earlier they worked together to portrayed Tony Blair and David Frost. Their collaboration here is just as good, although this film feels smaller, like a TV movie. A far better-than-usual one, bristling with snappy dialogue and good acting.  (Tinseltown)  3 1/2out of 5

EVERLASTING MOMENTS: Real life is not like the movies. It doesn’t come in three acts with a story arc that raises plot points and follows them through to the end. This excellent film from Sweden has several story lines, some finishing, some not, some not even central to the story.
It’s a bit scattered; just like life. And it has slow sections, but it’s also entirely engrossing and a sweeping view of one woman’s story. She sews and cleans houses, while her husband works on the docks. He’s also a cheerful (sometimes abusive) drunk and a budding unionist. She finds she has a talent for photography. It’s her personal growth that provides the central thread in this sprawling film against a backdrop of change in the early 20th century (cars, movies, electricity, strikes, World War I) as well as everyday concerns (children, church, a neighbor’s death). Just don’t expect the usual woman-finds-herself movie. This one is based on a an actual woman’s life, not a movie script formula. (VanCity Theatre) 4 out of 5

THE BOX: This Richard Matheson story was filmed as a Twilight Zone episode years ago. It probably climaxed with a thrilling surprise ending. This movie version works up to a revelation that should also startle us. It’s big enough. Instead, it takes it slow getting there, underplays the disclosure and lets the rest of the film peter out with no shock at all. We’re left wondering what the point was. Cameron Diaz and James Marsden play a married couple who get a conscience-testing offer. Frank Langella is the messenger. He has a small box and offers a million dollars if they just push a button and thereby kill somebody they don’t even know. NASA, the FBI and the top US security agency are in the story but this is not an action picture. It’s a tale of intrigue and a mystery, only a simmering one, though. (Theatres all over)  2 ½ out of 5

YOU MIGHT AS WELL LIVE: It’s strange to see that even these days physical infirmities, mental problems and alcoholism are still fodder for comedies. And not just in small doses but hefty recurring ones. In this low-class laugh-fest from Toronto and Hamilton, Ont., a serial loser and failed suicide is sent to an asylum where two years later he’s the air hockey champ. That gets him ousted and on to a quest to become a somebody. Let’s just say he looks for respect in the wrong places and does some particularly gross things, thereby affirming his stupidity, which the film finds funny. It’s mostly just crude. Josh Peace stars; Stephen McHattie supports (with child porn accusations) and Michael Madsen slums as a boyhood hero, now a drunk. (Granville Theatre) 1 out of 5