Michael Jackson's This Is It Hits Town: Reviews of New Movies for October 30th 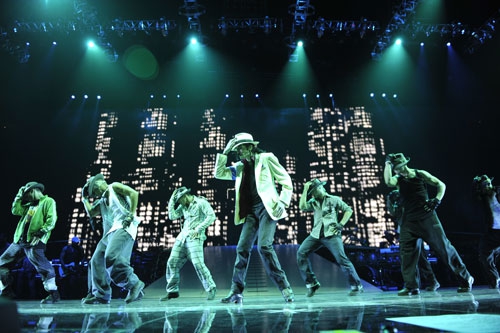 This Is It, the late Michael Jackson's new film

THIS IS IT: These last scenes of Michael Jackson performing bring up two main thoughts. There’s nothing here that backs up the rumors that he was depressed. He’s energetic, singing and dancing well, taking and giving direction easily and looking happy. And second: this looks like a terrific show that he was creating for his comeback tour. The film is edited seamlessly from hours of rehearsal footage. The effect is almost like a concert, interrupted now and then with glimpses of  the work that went into it. Some of these 17 songs come with giant pyrotechnical effects; one re-imagines Thriller as a graveyard scarefest  and one puts Michael into an old movie being chased and shot at by Humphrey Bogart. Black and White dazzles with a dueling guitars sequence  and Beat It has a simulated street fight plus Orianthi Panagaris of Australia taking over Eddy Van Halen’s famous guitar solo. It’s as if Michael was trying to create live videos for the stage. There’s also a rainforest sequence with a message. Michael intones “The planet is sick. Like a fever,”  And stay through the end credits for a few extra clips. (At theatres all over)  Rating: 4 out of 5

AMREEKA: The immigrant experience gets a more accurate representation than usual in this charming film. There’s humor and humanity here, when there was ample opportunity to get loud and strident.  A Palestinian mother and her teenage son end are fed up with border guards and restrictions in the Middle East and jump at the chance to emigrate to the U.S. They land in the Midwest but  nobody calls them terrorists and the immortal line “Why don’t you go back where you came from?” is spoken only once. Instead we get real incidents that actually happen to immigrants, a brief schoolyard fight for him, a money crisis for her, a growing generation gap for both. Although educated, she’s stuck flipping burgers and still manages to stay cheerful. The director knows her stuff. Her own parents came to the U.S. from Palestine. She made the film in Ramallah and Selkirk, Manitoba. (5th Avenue Cinemas)  3 out of 5.


VANCOUVER JEWISH FILM FESTIVAL: Not surprisingly this 21st annual edition also touches on Palestinian issues, directly in a TV production called Arab Labor. It’s a comic look at Arabs living inside Israel, a fast-growing sector. There’s also a documentary about Isreali soldiers shaking off the tensions the accumulate working the Palestinian border by unwinding in India, largely through drug taking. There are over 50 films screening from now until Nov 11, including comedies, documentaries and as the organizers put it “films that make you think”.. There are eight about the Jewish experience in France and four from Latin America. The Australian comedy Hey, Hey, It’s Esther Blueburger  looks interesting. It’s about frantic times leading up to a young girl’s bat mitzvah and stars Toni Collette and Keisha Castle-Hughes (Whale Rider). There’s more info at  www.vjff.org.