My VIFF Picks for Day 13 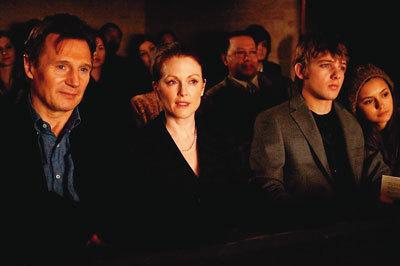 Atom Egoyan’s new film leads the pack today at the Vancouver International Film Festival, on the basis of his reputation.  But check out also that film from Manitoba, and that batch of excellent documentaries.

I’ve seen all but one of these. There are other recommendations for the last three days listed at the bottom.

CHLOE: Atom Egoyan’s latest gets its first Vancouver screening tonight. It drew mixed notices in Toronto; thumbs up for the marital infidelity drama (Julianne Moore suspects hubby Liam Neeson  of cheating and hires Chloe, the escort, played by Amanda Seyfried, to tempt him) but thumbs down for the thriller ending. The plot is from a French film of six years ago and is now transposed to Toronto with lots of snow and local landmarks. This is the movie that had to interrupt production when Neeson’s wife died after a skiing mishap.

BLACK FIELD: A prairie gothic. The idea makes so much sense I wish the film had turned out much better. Set in Manitoba in pioneer days, it creates a wonderfully strong atmosphere with empty landscapes, brooding skies and candle-lit homesteads. That backs up the rising sexual tension in this tale of two sisters on a remote farm visited by a handsome French-Canadian stranger asking only a couple of night’s lodging to rest his horse. The younger sibling is thrilled; the older says absolutely not. She’s a bossy motherly type, well-played by Sara Canning (from Vancouver and now prominent in TV’s The Vampire Diaries).  Mixed acting among the others, come-and-go accents and a story that’s less Bronte and more romance paperback hold this film back.   (Also Day 14)


THE AGONY AND THE ECSTACY OF PHIL SPECTOR: The famous “wall of sound” record producer is currently in jail. This film is like a two-track master tape. He’s on one track talking about his life, his hits and his artists, with plenty of examples spliced in, music by The Ronettes, Ike and Tina Turner, John Lennon and many others. The other track has testimony at his first trial, about guns and a woman’s death. The film goes back and forth and amazingly it works.
A Righteous Brothers song segueing to murder talk and back can be illuminating. A very good film. (Also Day 15).
ASHES OF AMERICAN FLAGS: WILCO LIVE: Fans of the alternative rock outfit from Chicago are in for a treat. So, are people who aren’t fans yet. This film captures an excellent band, with a terrific songwriter frontman in a series of absolutely cookin’ performances at famous venues like Tipitina’s in New Orleans and The Ryman Auditorium in Nashville. Jeff Tweedy’s songs usually start with a laid back country feel and eventually burst into a sonic storm topped by fabulous guitar solos by Nels Cline. It’s not exactly like being there live, but pretty close. There’s a  lament for the America that used to be in these songs and in the talk cut in between them.

NOMAD’S LAND: This is a real discovery, a beautiful travelogue that has a great deal of philosophy woven in among the pictures. “The virtue of travel,” it says, “is that it purges life before embellishing it.” That does happen to a young Swiss who sets out to duplicate a trip from a favorite book. The route is through Turkey, Iran, Afghanistan, Pakistan and India to Sri Lanka. These days those are tense, even violent, areas so he goes off the main road and, in effect, back in time. He mingles with gypsies, wedding revelers, Tajik riders, and in an extra-long visit the lesser-known Kalesh people who put on a spectacular celebration. Those scenes are stunning on the big screen.