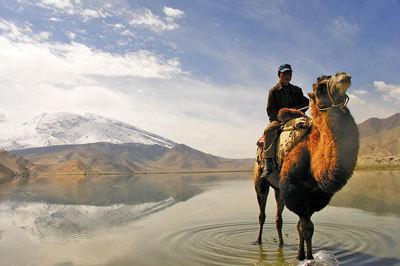 MY VIFF PICKS FOR Day 10

One of the joys of attending film festivals is chancing upon films you haven’t heard of but turn out to be exceptional. It could be for artistic merit or just good old entertainment.

My list for today at the Vancouver International Film Festival has at least two of those discoveries, and a some other possibles.

These are my best suggestions for now and the next few days. Please check back now and then. The list changes every day as titles that finish their run drop off and others debut.

NOMAD’S LAND: Discovery number one, a beautiful travelogue that has a great deal of philosophy woven in among the pictures. ìThe virtue of travel,î it says, ìis that it purges life before embellishing it.î That does happen to a young Swiss who sets out to duplicate a trip from a favorite book. The route is through Turkey, Iran, Afghanistan, Pakistan and India to Sri Lanka. He prefers to go off the main road where he mingles with gypsies, wedding revelers, Tajik riders, and in an extra-long visit the lesser-known Kalesh people who put on a spectacular celebration.
The scenes are stunning on the big screen. (Also Days 12 and 13. Rush tickets only today.)


65_REDROSES: You won’t be able to keep your eyes dry in 4 or 5 spots in this highly emotional documentary. It’s already popular enough that it’s screening twice today, after an extra show was added. The film is about Eva Markvoort, a 23-year-old from New Westminster, and her ordeal with Cystic Fibrosis. That’s a disease that causes fluid to build up in the lungs and usually death. Eva  suffers coughing spells and at worse times the feeling that she’s drowning. But also times when she looks perfectly normal, even cheerful, as she chats online with three other victims and waits for a transplant. The camera is there when the call comes, for the operation and for a lot of moving scenes before and after. (Also screens Day 13)


THE DAMNED UNITED: Fans of British soccer should enjoy this. The texture is not much deeper than a TV movie but the story is more than interesting. Back in the 1970s, Brian Clough has a short stint coaching Leeds United. He had big successes before and after, but couldn’t lead that team. Michael Sheen  portrays him with cocky self-assurance, not willing to admit failure but always ready to argue back. The snappy script by Peter Morgan has a particularly bristling recreation of a TV showdown between the coach and a predecessor (Colm Meaney). Jim Broadbent and Timothy Spall have showy supporting roles. (Also Day 13).

WILL NOT STOP THERE: This discovery is from Serbia-Croatia and immensely entertaining. It sets up a mystery, flashes around in time to explain it and along the way gives us a picture of life just a few years after a war. A former soldier catches a glimpse of a porn film and for reasons that are only later revealed sets out to find the female star. On the way he stirs up a bunch of gangsters, some raw memories from his past (in perfectly-handled flashbacks) and a probable love connection. It’s a good yarn strong on mood as well as bits of dry, goofy humor.


TETRO: Francis Ford Coppola is making movies again, not just wine. This is the second in his return and while interesting becomes a bit of a soap opera by the end. A very well visualized and acted one, though. Coppola wrote and financed it and told an English magazine it’s his most beautiful film and a ìpersonal projectî. That’s probably because it deals with family, one of his favorite themes, and there are some small echoes of his own life. A man arrives in Buenos Aires and looks up his novelist brother (Vincent Gallo) to ask why he’s stopped writing. A play he wrote in code may hold the key. A black and white film with color flashbacks.


ROCATERRANIA: When Renaldo Kuhler was a bored teenager he entertained himself by creating an imaginary country. Now that he's old and eccentric, he lets us see it all. You'll be amazed at the details. Through hundreds of drawings and his voice-over narration you learn all about this principality located between Quebec and New York State. He dreamt up an entire history, with changes of government, constitutional debates, an economy, prisons, an entertainment industry and even celebrities. The country also changed  in step with events in his own life.  He later became a renowned scientific illustrator but this is was an intriguing escape from reality. (Also on Day 12).


JERMAL: Another of the "nice" films. This one is from Indonesia and has a young boy brought offshore to a fishing platform where his father is boss. The problem is, the man denies he's the father. The boy tries repeatedly to gain his love but is given work to do instead, among a pack of boys who both harass and teach him. It has Oliver Twist elements, a close up view of some illegal fishing practices and an endearing battle of wills between a naive boy and a gruff man with reasons to avoid connecting.

A PROPHET: This French film was a big winner at Cannes and has been getting rhapsodic praise from critics. The story has a young Arab become a Mafia kingpin when he’s sent to prison.
(Also Day 11)


WHO DO YOU LOVE: The word on this one hasn’t been especially good. I’m interested because it tells the same story as Cadillac Records which played here back in February. It’s about Leonard Chess and the record company he ran in Chicago. The artists he brought to the world included Muddy Waters, Etta James, Howling Wolf and Chuck Berry. (Also Day 12).