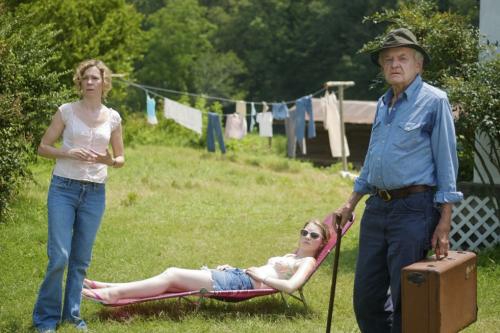 Whether by fact or fiction, severe issues come unspooling today at the Vancouver Internationaf Film Festival.

These are my best suggestions for now and the next few days. I've seen them all and recommend them.

And check back now and then. The list will change each day as titles that finish their run drop off and others debut.


THAT EVENING SUN: An outstanding film that didn’t get much notice for its first two screenings. You have a chance to catch its third and last tonight. Hal Holbrook plays a crusty 80-year-old in Tennessee who flees an old age home to go back to his farm. But it’s now rented to a man he despises. He calls him “white trash” and moves back in anyway, into a tenant shack. A contest of wills kicks in and as it escalates step by step gives us a rich and complex portrait of the two men. The acting is first rate and the look is crisp wide-screen.


HOMEGROWN: A lot of people these days have taken up growing a few vegetables in their backyard or on their balcony. They’d be really inspired by the family in this film. On one lot, in the shadow of a freeway in Pasadena, California, they grow over 6,000 pounds a year, feed themselves, sell to restaurants and teach others. Jules Dervaes and his three grown children call it urban homesteading, take us on a tour and in a light chatty tone explain what they’ve learned about people and the land. (Also Days 7 and 8).


REPORTER: As newspapers retract, here’s a salute to real journalism. Nicholas Kristof of the New York Times travels to report on atrocities in the Congo. The Rwandan conflict of years ago has swamped over to there and is now “one big massive gang war”. With two students and a camera crew he gets to refugee camps, a village where a raped woman lies abandoned and a warlord’s remote headquarters. It’s a fascinating look at his work, including a distasteful side. He keeps searching until he finds the worst possible stories to write about. Readers want nothing less, he says. (Also Day 13).


BREATHLESS: The foul language starts with the very first sentence and rarely lets up in this South Korean film. If you can take that, you’ll get a fast moving tale of a violent enforcer for a loan shark, an equally foul-mouth high school girl and a serious subtext. The film is really about domestic violence, showing clearly and brutally how it seeps down through the generations and produces these characters. It claims the problem is especially acute in Korea. The film was a major award winner there. The plot is intricate but unspools with a casual lightness. (Also Day 9)


PUCK HOGS: How about a comic interlude. This one was filmed in Oshawa, Ontario and would probably appeal to fans of the Trailer Park Boys. The humor is similar, low class but sharp. A hapless hockey team in a beer league, struggles into a play-off series and even a championship game. Along the way we get all sorts of distractions including old romantic rivalries, car mechanics who write children’s books, a lap dance with mom nearby and an actual pissing contest. The actors, several familiar from TV commercials, have a fun time with some lively material, and yes, actual hockey.

NIGHT AND FOG: Film festivals bring you the grim realities that regular movies rarely touch. This is a harrowing recreation of a real case of male rage. It’s from Hong Kong and dramatizes the rocky marriage of a local man and a Mainland Chinese woman. He’s unemployed. She has a part-time job which brings in a bit extra to top up their welfare money but drives him to jealousy. The film carefully details the disintegrating relationship, her temporary escape to a women’s shelter and then her return home to his rage. Thankfully the end is done with restraint but even then, strong acting and a director’s anger deliver a stunning film. (Also Day 12)


THIS WAY OF LIFE: A scenic documentary from New Zealand about a family forced out of their house (in a baffling dispute with a father) and moving to enjoy a simple life and almost total freedom in the mountains. (Also Day 10)

We All Fall Down

Around the World With Joseph Stiglitz