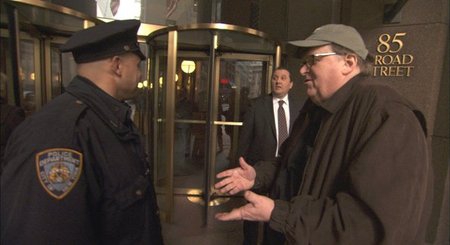 Just as the Vancouver Film Festival gets started some big competitors set up in the regular theaters, including a schlubby American and a pudgy Brit. (Read more)

CAPITALISM: A LOVE STORY: Michael Moore can’t fathom the financial details but he knows outrage. It’s in every frame of this essay on the economic crisis. We see a foreclosure from inside the house, as the sheriff comes knocking on the door. We see a rural couple lose the farm that’s been in their family for generations. We get side issues: underpaid airline pilots taking second jobs, a judge helping out a privately-run prison and companies taking out “dead peasant” insurance on their employees. That sprawl makes this an uneven film, muddled at times, but chock full of telling incidents and Moore’s eye for irony. He concludes that capitalism is evil and says Reagan and Bush were puppets of Wall Street (quite effectively in one Reagan clip). He limits his grandstanding this time to just an attempted citizen’s arrest and a megaphone rant. At heart, he’s still an entertainer. (At the 5th Ave. and other theatres.). Rating: 3 ½ out of 5

The film festival also covers this stuff. Here’s how those films compare.

AMERICAN CASINO has far too dense an explanation for the economic meltdown and then watches blacks in Baltimore lose their homes and mosquitos and rats breed on foreclosed properties in California.

WE ALL FALL DOWN shows whites suffering foreclosure and the collateral damage in the neighborhood as property values fall. The financial background is told clearly.

LET’S MAKE MONEY shows the negative side of money flowing freely around the world, including into tax havens. It’s from Austria, which is appropriate since two economists from there shaped the global financial system post World War II.

ENCIRCLEMENT also looks back to those two Austrians, but then goes as far back as Aristotle to show the origins of today’s global economy. The film is from Quebec and has a lot of subtitled economic historians talking at length. The effect is like a university conference.

AROUND THE WORLD WITH JOSEPH STIGLITZ is also university level as a former World Bank insider trashes the current state of financial system those two Austrians dreamt up and globalization in general.

THE INVENTION OF LYING: I expected a lot more from the man who originated TV’s The Office. Here, Ricky Gervais taking British comedy to the U.S., co-writes, co-directs and stars but gives us few stinging barbs and a film that is at best mildly amusing. He imagines a world where people have never learned to lie. So, part one has a rush of funny bits where people say what they actually mean. (Jim Carrey did something similar in two movies). Gervais tries to romance Jennifer Garner, who pegs him as merely “a fat guy with a pug nose”. His life changes, though, when he accidentally stumbles upon the power of lying. Money, fame and, in a Monty Python turn, a pedestal as a religious prophet come to him. Oddly, that’s only an interlude and the film settles back down into a standard romantic comedy. (At theatres all over) 2 ½ out of 5


TOY STORY 1 & 2 in 3D: When the stories, the animation and the sheer heart in these films is so strong who needs the newly added 3D? Sure there's depth but only rarely, as when Woody is almost run over by that truck tire, does it really matter. More important I think is that these early classics from the Pixar people (made in 1995 and 1999) are back on the big screen. Even though many kids have the videos and know every scene, it takes the full size to really appreciate the storytelling magic and the artistry. Woody (voiced by Tom Hanks) meets a rival in Buzz Lightyear (Tim Allen) in the first film and is captured by a toy collector in the second. Both offer lots of sly humor and real kid issues of loyalty and love before growing into frantic chase adventures. (Two weeks only, at theatres all over.) Rating: 4-1/2 out of 5.


ZOMBIELAND: Like I said, we’re getting a horror movie every week right now. This one is a pure comedy, inspired by, but not as wildly funny as, the Shaun of the Dead films from England.
Zombies have overrun the U.S. A mess of angst (Jesse Eisenberg), a redneck (Woody Harrelson) and later two women (including the former Little Miss Sunshine, Abigail Breslin) team up to fight off the flesh eating creatures, steal from each other and get from Texas to California for a huge showdown in an amusement park. It’s a fun trip with characters you grow to like and a surprise visit to a real celebrity who I’ll keep secret but is described as “at the tippy top of the A list”. It’s an inspired sequence, a notch or two above the rest of the film. (At theatres all over) Rating: 3 out of 5


WHIP IT: Another promising comedy that comes up short. Ellen Page plays a young woman in Texas who finds an escape from her small town and her mother’s conformity by skating on a roller derby team. She calls herself “Babe Ruthless” which she’ll have to be to play against the powerful “Iron Maven” played scary and strong by Juliette Lewis. The female empowerment theme is underwritten, though, and practically buried inside a fairly common sports story. The humor is spotty and the sport itself becomes a bit of a blur if you don’t know the rules. What the film does have is a cast of fan favorites, including TV’s Kristen Wiig and Jimmy Fallon. And Drew Barrymore, who also debuts as a director, with medium results. (At theatres all over) 2 ½ out of 5

THE BOYS ARE BACK: Clive Owen stars as a sportwriter charged with raising two sons after his wife dies. A weepie. Its drawn mixed reviews but much praise for Owen's acting. (5th Avenue Cinemas)

The Invention of Lying