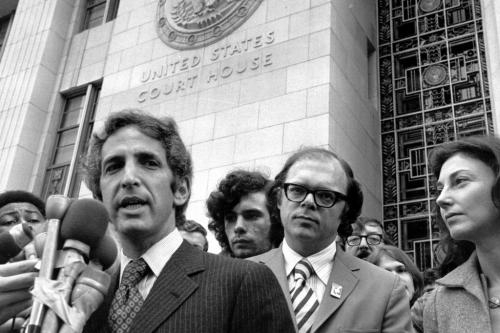 The Most Dangerous Man in America,  playing at VIFF

These are my best suggestions for the next few days at the Vancouver International Film Festival.  I've seen these films and recommend them. Dull, boring or pretensiously arty films don't make the list.

And check back now and then. The list will change everyday as titles that finish their run drop off and others debut.


A CARGO TO AFRICA: Rock Demers from Quebec has been producing warm-hearted family films for about 25 years. This new one has a grizzled man and a pesky boy strike up an unlikely friendship. The man (played by Pierre Lebeau) was an aid worker in Africa and wants to go back. The boy sees him abandon a pet monkey, intercedes and triggers an adventure that includes breaking into a zoo, an off-road motorcycle chase and the police. More serious matters pop up later. The film is well-made and the acting by the renowned Lebeau is strong. (Also on Day 3)


THE GREAT CONTEMPORARY ART BUBBLE: An excellent documentary on a particular side issue to the financial meltdown. When the stock market tanked, investors jumped into buying and selling modern art. This film shows the euphoria and the dirty secrets. Auction houses, galleries and promoters connived to boost prices. Film critic Ben Lewis, who made this film, saw a bubble forming and helped burst it. He explains it all, and shows a great deal of it, to entertaining effect.
(Also Days 3 and 9).


THE IMAGINARIUM OF DOCTOR PARNASSUS: This one I haven’t seen but how much recommendation do you need? It’s Heath Ledger’s last film, with Johnny Depp, Jude Law and Colin Farrell filling in after his death. It’s by that fantasy master Terry Gilliam and was partly filmed in Vancouver. Christopher Plummer plays the doctor who owes a gambling debt to the devil.
(Also on Day 4)


THE MOST DANGEROUS MAN IN AMERICA shows how Daniel Ellsberg came to release the Pentagon Papers to the New York Times. They helped end the Viet Nam War, brought on a key press-freedom ruling from the U.S. Supreme Court and led Richard Nixon’s presidency  to self-destruct. Amazing clips from Walter Cronkite to Dick Cavett re-create the era, while some nasty bits from the Nixon tapes add background. Ellsberg recalls it all today with a bit of disappointment amidst the triumph. A must see for people who lived through the time or want to learn about it. (Also Day 4 and 6).


MOTHER: Bound to be one of the hits in the festival, this is the new one from South Korea’s Bong Joon-Ho. He wowed us two years ago with The Host about a pollution-spawned sea monster. This time he’s in Hitchcock mode with a mother’s quest to clear her son of murder charges. The film is laced with irony, eccentric elements and humor. But also style, atmosphere and a narrative drive that builds to an unexpected ending. (Also Day 6 and 12).


A SHINE OF RAINBOWS: Heartwarming, precious, a bit maudlin. Yes, it's true but Vic Sarin's scenic family film also has a remarkable performance by a new child actor. John Bell plays a shy orphan who's forced to grow out of his shell and then has to face up to tragedy. With his supremely expressive face, he's entirely convincing and holds his own against Connie Nielsen and Aiden Quinn, as the couple who adopt him  and bring him to a picturesque, some say magical, island in Ireland.


SWEETGRASS: A simple film about herding sheep turns out to be a wonderful find. The pictures are spectacular as a herd in Montana is moved to a high grazing area. Then you realize there’s no talking. Nobody narrates, and only occasionally do you hear the cowboys say anything. (Except for one startling outburst of cursing on a particularly hard day when wolves were threatening and the sheep were un-co-operative). Most the time this is a visual tone poem, both a celebration and an elegy for a way of life. (Also Days 13 and 15).

EXCITED: Gabrielle Rose as a domineering mother is very funny and the best part of Bruce Sweeney’s new sex comedy. Besides Vancouver, of course, looking soggy but nice. (Also Day 3 and 7).

SOUNDTRACK FOR A REVOLUTION: A great collection of old news clips, recent interviews and new musical performances come together in a rather standard documentary about the civil rights movement of the early 1960s. (Also Day 3)

A Cargo to Africa

At the Edge of the World

Soundtrack for a Revolution

The Imaginarium of Dr. Parnassus