The new movies for Sept 25 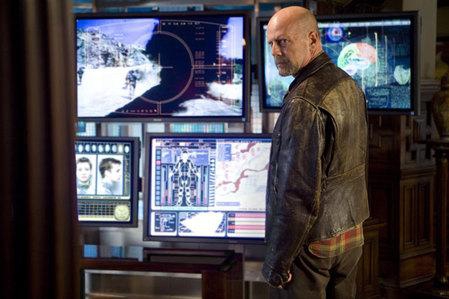 By Volkmar Richter
Bruce Willis has hair and then he doesn’t. That’s one of the oddities the new films bring us this week. There’s also the last toke for Julian, Ricky and Bubbles. (read more)

SURROGATES: This dazzling high tech thriller is full of ideas, critical jabs at modern society and visual imagination. What it’s short of is people, plain old real human beings you can care about. Consequently, it’s hard to feel attached to the film and that of course is partly the point. In this story people don’t interact in person. They stay at home and send robot stand ins out to the streets, and buses and offices to speak for them and represent how they like to appear. They have perfect skin, for instance, any age, a full head of hair for Bruce Willis. He plays a cop who’s working his alter being to investigate the murder of some other surrogates and their owners. Eventually, he’s forced to come out for real and traces a conspiracy, a resistance movement and some corporate misconduct. The film is about our addiction to technology. The best scenes show how the system works. Willis can only interview a CEO through his surrogate who is flanked by surrogate public relations women. Come to think of it. That’s not that far off what already happens. (At theatres all over)

FAME: This remake and update of the huge hit from 1980 is perfectly OK, unless you’ve seen the original. Then it comes off as a pale copy. The music and the dancing are vibrant; the stories in between are trite. Through four years at New York’s High School for the Performing Arts, we watch a batch of students grow, suffer their anxieties and occasional humiliation, and generally find themselves. Young love, jealousy, insecurity, grandstanding, defying parents. They’re all here but where the original was tough, even gritty, this one is mild and satisfied with being inspirational. As the line in one song says, “don’t be afraid to succeed.” The staff includes old hands like Debbie Allen, who was in the original, and Kelsey Grammer. The students are played by an attractive crop of newcomers. Kherington Payne, is best known for an untimely exile from TV’s “So You Think You Can Dance” while Naturi Naughton is a standout singer. We last saw her rapping as Lil’ Kim. Here she does a Leslie Gore song. Now, that’s going back a ways. (At theatres all over)

TRAILER PARK BOYS: COUNTDOWN TO LIQUOR DAY: Like them or not, you must admit these three ne’er do wells are a unique Canadian comic invention. Ricky, Julian and Bubbles are hapless schemers and complete under achievers. There’s something endearing in the way they snub most of the conventions of polite society. Often they tell it like it is, like Ricky’s message to the parole board that he’s going to grow marijuana again but should be let out of prison because it costs too much to keep him there. The boys are released as the film opens and decide to start a real business back at the trailer park. Before you know it they’re again battling with the manager, their constant foil, his plans to go upscale and their own foibles. They end up staging a bank robbery as their last great gesture. It would be pretty funny if only the writers didn’t set their comic sights quite so low. The park superintendant spends most of the film in his underwear, and part of it out of them (necessitating some discreet blurring effects). Odd to think that he’s played by a classically-trained stage actor. (At theatres all over)

CHARLIE KAUFMAN: DOUBLE TAKE: In advance of his appearance at the Vancouver International Film Festival’s forum next week, you can check out two of Charlie Kaufman’s best known works. You can see if his most recent (and directorial debut), SYNECDOCHE NEW YORK, really is as obscure as many reviews said, or a “great film” as Roger Ebert and some others have written. And you can compare it to ADAPTATION, his film version of a guide to orchid growing that drew much more uniform praise. Meryl Streep is a hoot in that one. Both films play Saturday at the VanCity Theatre. (www.vifc.org)

THIS WEEK’S HORROR MOVIES: Yes, there are two.

DEAD SNOW: I’m not with the many fans for this Norwegian entry. I think in the early going it does a great job of building suspense and foreboding, something of a lost art in these kind of films. “There was an evil presence here” that shouldn’t be re-awakened a group of students is warned when they arrive at a wilderness cabin. That’s all too slow and boring for the fans. They want to get right to the blood and gore. When it comes, it’s non-stop as the would be vacationers battle an army of Nazi soldiers now zombies. A lot of it is imaginative, and for the right audience, funny. But it sure gets tiresome pretty fast. The subtitles remind me that the film festival is only days away. (Tinseltown)

PANDORUM: Strange humanoid creatures take over a spaceship and feed on humans. That’s the horror part of this partly science fiction film. The space ship is on its way to colonize another planet after the earth’s resources have been exhausted. The title refers to a form of space madness. There’s also a race against time with a reactor threatening to explode. Dennis Quaid stars along with Cam Gigandet, who played the grinning evil vampire in Twilight. I haven’t seen the film, but my contact says “Loved it! Dennis Quaid (Enemy Mine) is the best for scifi movies!!!”
(At theatres all over)