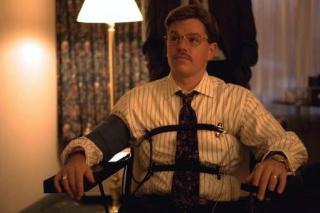 The drought has eased. Leftovers are over. The films that arrived today are truly new and at least one, maybe two or three, are very good. (Read more)

THE INFORMANT: You learn right off the top that this film is different. It proclaims that it's based on a true story and then adds: “So there.” Steven Soderbergh has taken a tale of price-fixing in the corn industry, kickbacks and delusion, found it just too bizarre to be played straight and gone for laughs. Chuckles actually. Matt Damon plays a globe-trotting executive for an agri-business multinational based in Illinois. He alerts the FBI to the price-fixing because he wants to take over when his bosses go to jail. He's also doing a bit of embezzling on the side and, in a series of quirky voice-overs, musing on subjects as arcane as how to pronounce Porsche and “how do polar bears know their noses are black?” We, as well as the FBI, aren't ever sure what to make of him. Damon plays the role perfectly; straight but always with a hint that something is a bit off. His fumbling efforts to get real evidence with a hidden tape recorder show he can play comedy. He gets solid support from his squeaky-voice wife, played by Melanie Lynskey. She's now on a roll, 15 years after she and Kate Winslet co-starred in their debut movie. She's landed in a very entertaining concoction, light and bustling with a retro 70s tone. (The Park, Dunbar and many other theatres)

BRIGHT STAR: A thing of beauty is a joy forever. Like this film. You know John Keats as one of the great romantic poets but you may not know his tragic story. He died early, poor and unknown. This remarkably moving film tells another part, his short love affair with a young woman who defied her mother to see him. Fanny Brawne was expected to marry well. Keats was penniless. He was also sniffy that her only accomplishment was needle-work and that she didn't understand poetry. She was headstrong, though, convinced Keats to teach her and gradually became part of the short life he had left. The film delicately charts their growing romance from his early condescension, through her clear-eyed persistence to the painful end. It's seen from her point of view. Keats is almost a visitor in her story. Abby Cornish is wonderful as Fanny and may win awards if only for an extraordinary breakdown scene late in the film. Ben Whishaw, as Keats, absolutely captures both his nobility and a stubble-face sense of mystery. Paul Schneider is a scene-stealing presence as his friend Mr. Brown. The film was written and directed by Jane Campion with a calm elegance and a love of poetry. It's her best film since The Piano 16 years ago. (Fifth Avenue Cinemas)

CLOUDY WITH A CHANCE OF MEATBALLS: The popular children's book is now a wild, funny energetic piece of animation. Food falls from the sky, a delight for kids. But don't think this is like the Teletubbies and their shower of tubby toast. This is for older kids. When the main character complains about his father's use of metaphor, you know the humor is more adult than kiddie. This is like a Frank Capra movie as a young inventor tries to do something good, wins the people's cheers but then finds the mob turned against him when things go bad. He (voiced by Bill Hader) builds a machine that turns rainwater into food. The local mayor sees economic potential and promotes a giant theme park. An intern at a TV station (Anna Faris) has a human interest assignment that turns into a career-making scoop when the machine tosses down heaps of food and a giant storm starts coming in. Things get frantic with thrilling action, available in both 3-D and flat screenings. There's the usual kid theme of trying to win a father's approval but the many incidental jokes are the most fun. A recurring video of “Fight the Power” sung by kittens. A condescending news reader on TV. A no nonsense cop voiced by Mr. T. (Where has he been?).
(Theatres all over).

JENNIFER'S BODY: This week's horror movie comes with a lot more expectation than usual. First, there's Diablo Cody, the writer. It's her next film after Juno for which she won an Oscar. Then there's Megan Fox, the star. She's the ogle bait who shot to mega-fame in the two Transformers movies. And third, it was filmed here in Vancouver. A bit of local pride. Too bad then, that the results are so disappointing. The story, set in Minnesota, has high school hottie Jennifer turned into a man-eating vamp (literally) after a rock band's satanic ritual goes wrong. It's supposed to be a horror comedy but isn't all that funny or scary, neither sending up the genre nor delivering the shocks. It looks cheap, lumbers along at a leaden pace and, worse, is short of the inspired wisecracking dialogue Cody is known for. Her script is smart, though, on the issue of friendship, specifically Jennifer's mean-girl offensive against the glasses-wearing, plain girl who's been her best pal since childhood (Amanda Seyfried, last seen as the daughter in Mamma Mia). The film could have done much more with that sub-plot. (At theatres all over)

LOVE HAPPENS: This film starts off strong, with a glossy look, snappy dialogue and two likeable stars but ends maudlin and less than believable. Oh, and Seattle is so lovingly photographed it looks gorgeous. Good that it gets the screen time because when our two likeable stars dine at the Water Street Café it's clear most of this movie was shot here in Vancouver. Aaron Eckhart plays an author who teaches people how get over the death of a loved one. Jennifer Aniston plays a florist who's not had much luck with men. You'd think she's had enough of that role in real life, but here she is, edging into a romance with Aaron. Not a lot of sparks fly, though, and the film turns to concentrate on his story, slowly drawing out that he hasn't practiced what he teaches. Mind you, his seminar scenes alternate between heart-felt and embarrassing, so who's to know what's the right way. It takes an overly emotional scene with Martin Sheen as his father to set him right. Aniston and Eckhart are both good in their roles. What gets in the way is that uncomfortable conjunction of romance and doing your grief work. The film doesn't help when it uses the most tired bit of symbolism ever, a bird that needs to be freed from its cage. (At theatres all over).

BLACK: This little-known film is typical of the fast-paced violent action films coming from France these days. Black is a Senegalese immigrant in Paris who botches an armored car robbery at the start of the film and flees back to Africa. There he gets involved in a diamond heist. Some powerful other people are also after the stones. Some of the reviews have been good on this one noting especially the later developments that bring witchcraft, prophecy and African fairytale into an otherwise standard heist movie. In other words, something new. (Tinseltown)