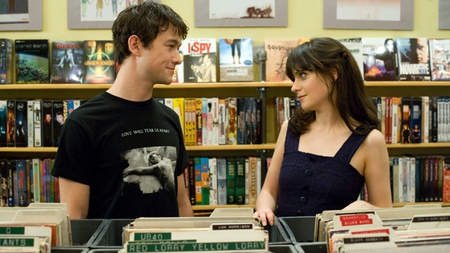 (500) Days of Summer
Two romantic comedies go head to head this week: one very good, the other bad. There’s also a smaller tussle by movies about music and a thought or two about children.


(500) DAYS OF SUMMER: This is one of the best romantic comedies in years because it feels authentic. The couple, played by Joseph Gordon-Levitt and Zooey Deschanel, comes across as real people you can identify with. Best of all, you grow to like them and root for them. He’s a greeting card writer with a pessimistic bent. She’s Summer, the new hire in the office, and even though she insists she’s not looking for anything serious because love is just a fantasy, he’s smitten. The film, which warns right off the top “this is not a love story,” charts their 500-day relationship pretty well from the day it ended and bounces back and forth in time to its various high and low spots. That unusual structure keeps it busy and light on its feet. Yearning, elation, playful visits to a karaoke bar, record store and IKEA and ultimately rejection are all carefully documented, mostly from his point of view, though. She remains largely a mystery, one of the few shortcomings in this hip and funny movie. The two stars are wonderful. (5th Avenue Cinema).


THE UGLY TRUTH: Titles like that are dangerous. They just invite wisecrack lines from reviewers, especially if the film is as bad as this. I didn’t buy a word of this alleged romantic comedy. Katherine Heigl plays a California TV producer with about as much authority as a kid fresh out of BCIT. She certainly can’t control Gerard Butler as the new commentator that her boss has hired for her morning show. He stirs up the show and boosts the ratings with rants about men, women and sex. He tells her to learn how to “inspire an erection.” In the real world he’d face a sexual harassment complaint and the station would have the FCC on its back. Not here. But little in this glossy, high profile film is real. Instead, we get a succession of gratuitous sex jokes and the dirty language that goes with them. Heigl seems like a nice person. How did she allow herself to be sunk into this mess? The film also pretty well reverses much of what the women’s movement supports. (Check out the ending). There’s one bit of reality, though; as the on-air sex talk proves popular, the station’s management orders more, cutting back the news to make room for it. The film has nothing to say about that. (At theatres all over).


G-FORCE: This is the kind of children’s film that has parents in a quandary. It has no lessons to teach and no social significance at all. But it sure does entertain. It’s like a James Bond adventure for kids, with huge set-piece action scenes, lots of explosions and a villain (Bill Nighy) out to control the world. On the other side are three guinea pigs and a mole trying to decipher his computer files. They’ve been trained as government agents by Zach Galifianakis (last seen as the brother-in-law in “The Hangover”). Another agent (Will Arnett) is trying to catch them to shut their project down. The result is an extremely elaborate, fast-moving and loud 89 minutes from blockbuster producer, Jerry Bruckheimer. The film mixes live action, computer animation and effects and terrific 3-D. It’s used here as the gimmick it really is. Lots of things are dropped, pointed or thrown at us, particularly shattered glass. (At the Park and many other theatres).