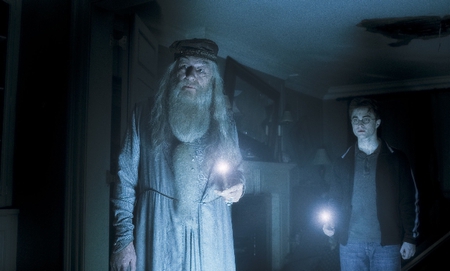 Harry Potter: seamless
The new movies for July 17 are reviewed here by Volkmar Richter who writes: "You can’t avoid Harry Potter this week, nor should you. But if you must, there are two hits of war, a dose of pollution and some comical sex play from France. Read his reviews here."

HARRY POTTER AND THE HALF-BLOOD PRINCE: Ever since it opened on Wednesday, this 6th movie about the boy wizard-in-training has had a huge response from the fans. Both at the box office and in comments online, where it looks like the nit-pickers outnumber the outright enthusiasts. Sure there are faults to be found, but overall this an elegant piece of film storytelling, beautifully visualized and adorned with seamless special effects. It’s a transition in the series. There’s a great deal of content to get across and less spectacle than we’re used to. Plus a thick ominous mood of foreboding. Harry’s final showdown with Lord Voldemort is coming. Headmaster Dumbledore and a teacher brought back out of retirement arm him with information. That bully Draco Malfoy is skulking around apparently on a mission while that unctuous Snape is poised to help him and the Death Eaters are on a wrecking spree. All the while, there’s a sweet puppy love sideshow. Harry, Hermione and Ron are now older teenagers after all. If you don’t know the book, you might lose your way now and then. Some story lines are underplayed (who the half-blood prince was, for instance) or brought in late (like the all-important Horcruxes). Some scenes in the middle drag but the film recovers to deliver an emotional ending. Jim Broadbent is the latest addition to the who’s who of fine British actors playing the teachers, Tom Felton brings new depth to his role as the conflicted Draco and two young actors are eerie in some flashbacks to Voldemort’s early years. (At theatres all over)

THE HURT LOCKER: There have been many films now about the Iraq war but audiences have mostly stayed away. Even from the Oscar winning documentary, Taxi to the Darkside. There’s too much to think and argue about. This film tries a different approach. It doesn’t deal with the right and wrong issues, except maybe in a line or two of dialogue. It delivers breathless suspense watching a company of U.S. soldiers assigned to bomb-disposal. It’s fiction that feels absolutely authentic. The writer spent time with and reported on squads like this. There are a series of scenes as they uncover a device and one man goes out to disarm it. He doesn’t know if there’s a timer ticking down or a guy with a remote nearby ready to set it off. People watching from rooftops and mosques look suspicious. There’s no music on the soundtrack as he works. These scenes are very effective building tension and ultimately setting up a character study. One soldier, well-played by Jeremy Renner, takes to the work like a daredevil and, as one guy labels him, an adrenaline junkie. His company leader (Anthony Mackie) calls him “a redneck piece of trailer trash” for disregarding standard procedure. This is a very good film because it goes far beyond the usual maverick versus authority battle to touch on deep fears and the lure of war itself. Kathryn Bigelow directed and Ralph Fiennes, David Morse and Guy Pearce show up in small roles. Filmed in Jordan, and (a few later scenes) in Vancouver. (Playing at Tinseltown).