The new movies for July 10 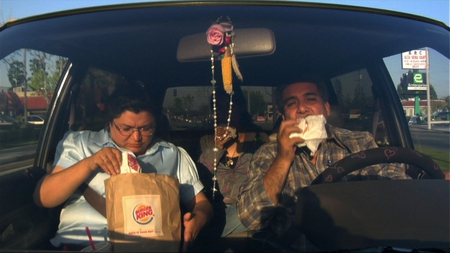 Silly, silly Bruno hogs the spotlight this week. If you liked Borat, take note. If not, read further to a couple of romantic comedies, or better yet a startling look at the food we eat.

BRUNO: You’ll find yourself laughing a lot watching Sasha Baron Cohen’s latest antics but don’t mistake them as satire or a blow for equality. This is gonzo humor with a mean streak. It’s modern, and that’s all. Bruno is much like Borat from a couple of years ago. He’s a dim-witted, celebrity hound from Austria who sets off for America hoping to become famous. More famous than Hitler, he says. He’s a flamboyant gay and as we watch him in a series of encounters with people he thinks can help him, the film becomes a long string of penis and anal jokes. They’re often so outrageous you’ll be astonished that the filmmakers actually put them on screen. However, they’re not really the blow against homophobia that Baron Cohen imagines. In one sequence Bruno tries to lure Ron Paul into bed. Of course that provokes an outburst from the libertarian politician but does that say anything important? He couldn’t goad a trio of Alabama hunters sitting around a late night campfire into anything more than a few mildly caustic comments. And a TV audience in Dallas had good reason to turn hostile. The film is better at skewering today’s cult of celebrity. Self-absorbed and not-that-bright Bruno tries to bring peace to the Middle East, which he calls Middle Earth, and adopts an African baby, like Madonna and Brangelina, he says. Those shots hit the mark. (At theatres all over).

FOOD, INC.: On the labels in the supermarket, it’s a pastoral fantasy. There’s a red barn, a picket fence and cows grazing in the meadow. In real life, the picture is grey and ominous. Cows stand in manure in huge barns. They’re fed corn, not grass. Chickens never see the sun. That’s the view of modern industrial agriculture presented in this unsettling film, the third in the last year or so to examine the business of food. It’s based largely on two major books: Eric Schlosser’s Fast-Food Nation and Michael Pollan’s The Omnivore’s Dilemma. Both men talk in the film, alongside farmers and food activists. The major food companies declined to appear. Remarkably, though, this is a calm, not-at-all shrill, expose of a system that gives us cheap food, but also obesity, diabetes, exposure to e coli, animal abuse and unsavory political ties. Also inadequate government monitoring, which is detailed alongside some emotional clips from a mother, now a food safety campaigner, who’s son died after eating a hamburger. The facts are American, but since Canada follows similar policies they’re just as relevant here. And it’s not all a downer, or even a tract promoting vegetarianism. What it does endorse is getting back to concepts like free-range, grass-fed and farmers’ market. You might want to eat before seeing it, not because there are some brief hard-to-watch animal scenes, but because you’ll be thinking too much about why things got this way. (5th Avenue Cinemas).