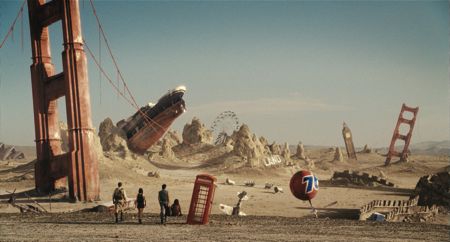 Still from Land of the Lost
There are 10, count 'em 10, new movies opening today in Vancouver. So how do you choose? Let's start by grouping them. You'll find a whirlwind tour of five distinct styles of comedy. Also three documentaries and an opera but leave some room for a little gem called Goodbye Solo. (Read more)

THE HANGOVER: This is the funniest movie I’ve seen in years. Granted, I saw it in a great environment-a preview at UBC where the students were howling with laughter. But I didn’t need their help. The jokes came non-stop, one after the other. They’re firmly based on interesting characters and the outrageous situations they find themselves in. Four young guys go to Las Vegas for a pre-wedding stag, and in the morning can’t remember anything. Nor can they explain the tiger in their hotel room, the chicken or the baby. What’s worse, they can’t find the groom. This script is very smart. The search is wildly funny and the answers the boys turn up are logical, not silly. Bradley Cooper and Ed Helms are the best known of the four actors, but Mike Tyson and an outrageously-fey Chinese gangster stand out. It’s less raunchy than is normal these days for films like this-at least until some photos in the final credits--but it did keep our film classifiers busy. Among other things, they counted: “approximately 144 instances of coarse language”. (At theatres all over).

LAND OF THE LOST: When you bring an old TV show to the big screen, what’s best? Do you recreate it with reverence for the fans who used to watch it? Or do you send it up, showing how far you’ve advanced beyond it? The producers of Will Ferrell’s newest film have made the wrong decision at just about every step of the way. They try to do both, but only halfheartedly and don’t succeed well at either. Will plays a scientist who is sucked through a space-time vortex to a land where dinosaurs roam but cars from the 1950s lie around in wrecked heaps. Did he go back in time, or forward? Not clear. He claims to have a solution to global warming. That’s a nod to contemporary concerns but also ludicrous in this script. Unlike in the TV show 35 years ago, that’s not his son and daughter with him, but an English scientist (Anna Friel) and a wisecracking survivalist (Danny McBride). That sets up a few good jokes, a bunch of clumsy ones and some breast groping that parents might be wary of. The special effects and the whole film look cheesy, possibly deliberately. Not a good decision either. (Playing all theatres all over)

EASY VIRTUE: Here’s a film that straddles the decades, not always well, but with plenty of energy. It starts with Noel Coward’s wit and zinger ripostes from a 1920s play. It gets the full BBC-country house treatment with perfect period detail in the look on screen. And it has a wonderful cast featuring Kristin Scott Thomas, sniffy and disapproving of the new bride her son has brought home.

She’s an American, played by Jessica Biel, and her free-thinking ways disrupt the house. A sharp-word face off is coming for sure. In contrast, the two men in the group, Colin Firth as the father, and Ben Barnes as the son, are rather bland. Also, there are a few too many modern touches in this film, including a couple of recent songs. They’re jarring in this mostly smooth and amusing entertainment. (Fifth Avenue Cinemas)

MY LIFE IN RUINS: Some comedies make it solely on charm. Nia Vardalos turns it on again, as she did in “My Big Fat Greek Wedding”. She's a professor of classic history reduced to guiding tourists around Athens. The film is slight, predictable and full of stereotypes but also sunny, pleasant and entertaining (if it’s a “nice” comedy you crave). What little bite it has involves the travelers. While Nia tries to enlighten them, they only want to go shopping and are easily diverted by ice cream. They’re easy targets, sure, but the film is right on with the dynamics of these tour groups. If you’ve ever been on one, you’ll recognize the types and how they act. At best, the film is also a travelogue. It takes us right to the Acropolis, Delphi and other important sights. Of course, Nia is also looking for love, almost mandatory in these comedies. Richard Dreyfuss plays a sharp-tongued widower, Canadian Harland Williams a dim American and Greek star Alexis Georgoulis is the bus driver. (At eight lower mainland theatres)